Programming languages' top range differs each year, if not every half of the year. In this high-level competition, technologies are fighting tight to earn developers’ recognition and credibility. And of course, each and every programming language finds its place for the particular needs adapted to the functionality it offers. Despite the wide range of possibilities, development teams nevertheless choose their favorites. So, to provide the best solutions and surpass the competition, software engineers constantly monitor the most popular trends in the IT industry. Indeed, there are a great number of different criteria that help to analyze if a technology or tool is a perspective in the long run.

At Incora, our developers constantly use the latest updates and most common technical solutions which considerably increase our performance. And as we represent the software development community, we compiled a list of the top 5 programming languages for 2022, based on our experience, and the general statistics on public-made choices. 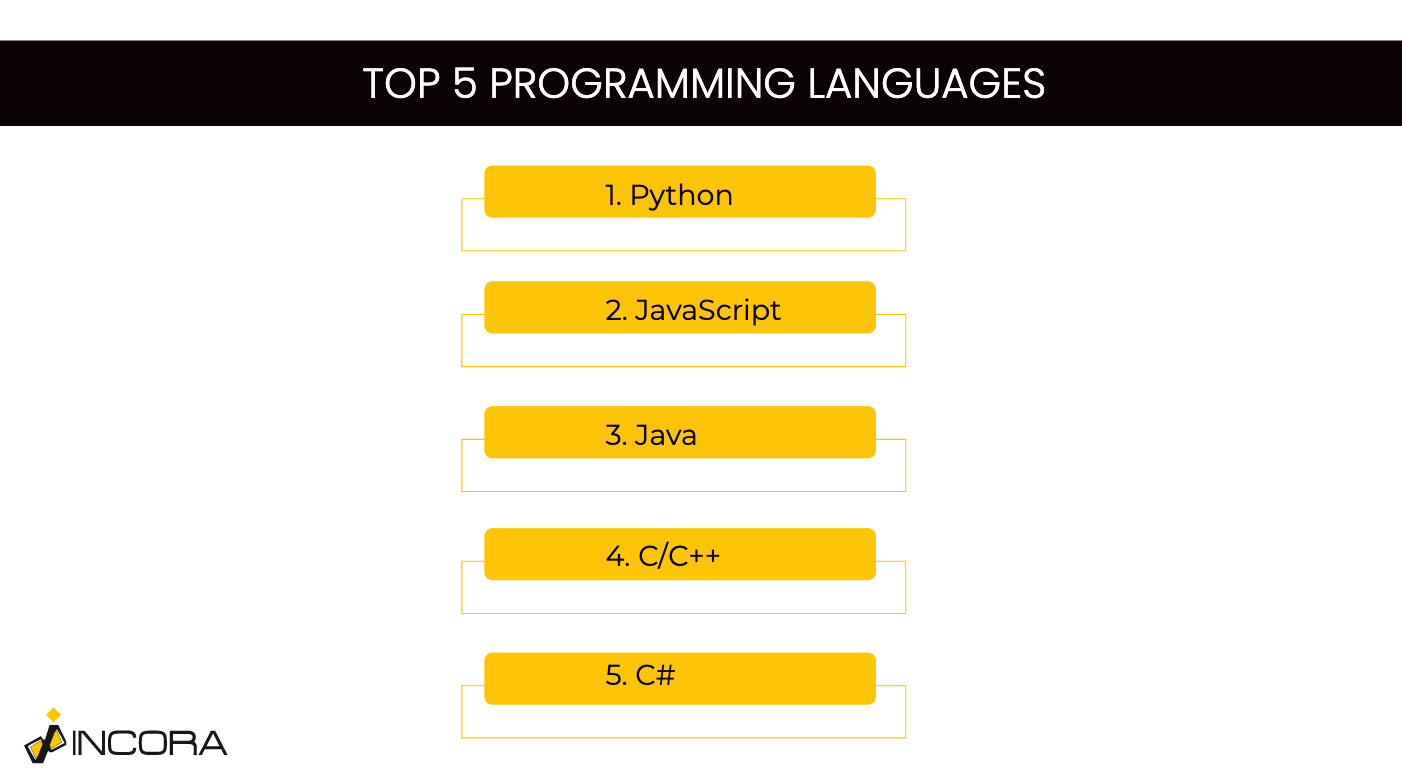 Python is a user-friendly, comprehensive programming language that is used for general purposes. It is dominating in the rating published by TIOBE. And as we can see from the Programming Community Index there, Python’s popularity in developers' circles is constantly increasing. A lot of programmers begin with Python because it has clear, intuitive syntax.

Python is used in multiple areas. It is a popular programming language for scientific computing, machine learning, and engineering. Moreover, it is a great choice for the development of web and desktop applications, network servers, media tools, back-end services, and API.

Also, this programming language provides simple functions and variables without much interrogation in class definitions. Python is very fast and easy to deploy. It is widely used to develop scalable web applications, especially for startups.

The Python-based web development frameworks include multiple options. Considering our experience in software development, Django is the most solid framework (based on its flexibility and possibility to work with extensive databases/architectures). However, there is also Flask, which is competing with Django for the spot of the most popular Python-based framework.

The next popular programming language is JavaScript - a dynamic prototype-based programming language created in 1995. Primarily, JavaScript got popularity among frontend engineers and soon became a major language for web development. For 9 years, according to StackOverflow Survey, JavaScript was one of the most commonly used languages. This research was in 2021, but we are sure and we see that in practice, JavaScipt is still going to have a competitive advantage with its frameworks like NodeJS, ReactJS, Angular, Vue, and many others. Even though JavaScript is considered to be mainly the client’s side language, it is also used on the server-side through the NodeJS framework.

JavaScript belongs to the core technologies of the Web alongside HTML and CSS. The majority of sites were built with JS because it enables interactive web pages and web applications. It is also extremely flexible with its syntax and runs very smoothly, and this influences the performance of JavaSript-made products.

Java is considered to be very stable and is widely used for building enterprise-scale web applications. The majority of fortune 500 companies used this programming language for making numerous backend applications. Java’s frameworks comprise numerous solutions, that are widely used.

Despite the fact that Java was created in 1991, it still remains in high demand. Java is widely used in Android App Development. It became even more popular after Google created Android Studio, a Java-based development framework. Even though Kotlin was announced as the official language for Android development in 2017, Java remains widely used. Kotlin works great with all existing Java libraries and frameworks. Also, Java is an object-oriented programming language, which is platform-independent. You can code on any device using JVM - Java Virtual Machine.

C is one of the oldest programming languages, and it is from which JavaScript and C# are derived. It was also released ten years before Java, making it much older and having comparable problems. At the same time, it does not have the same level of popularity as Java. However, if you want to create sophisticated programs and apps that require a strong back end, C++ is the way to go.

C++ can be thought of as a more advanced version of C. According to the TIOBE Index, C is currently the second most popular language, closely behind Python. Both languages are often utilized to construct a range of applications due to their speed.

Because it is exceptionally quick and stable, C++ is also commonly utilized by competitive programmers. It features a feature known as STL (Standard Template Library), which stands for Standard Template Library. This is a library that includes ready-to-use libraries for a variety of data structures, arithmetic operations, and algorithms. The language's library support and speed make it a popular choice among high-frequency traders as well.

However, among the several minor drawbacks, there are significant issues. For example, the high-level constructs must be manually created, as also possible buffer overflow and memory corruption.

C-sharp is an object-oriented programming language created by Microsoft in 2000 as a rival to Java. The language is consistent and logical, which makes it easy to learn for beginners. The code is checked, which makes it easy to spot the bugs. C-sharp is mainly used for the development of web and desktop applications. It is also a popular solution for VR, 2D, and 3D gaming. It was mostly used for the development of apps for Windows systems, but, nowadays in tight cooperation with the .NET framework, it is possible to create native apps for various platforms.

The language is suitable for writing applications for both hosted and embedded systems. It is also economical with regard to memory and processing power requirements.

Here is also a rank for top cross-platform frameworks.

Despite the fact that there are hundreds of programming languages, only a few make the cut for a short list of languages you should be familiar with. The ones mentioned above are at the head of the pack. However, to make a choice on which programming language will be the best option for your particular product - you need to go deeper and learn more about the possibilities each of them could bring.

Here, at Incora, we constantly learn new technologies and tools to solve issues that arise during web and mobile development. To meet the market challenges and transform our clients’ businesses, our company continuously adopts innovations, improves performance, and introduces new offerings. We work with the most popular programming languages and frameworks, which are relevant to modern requests. Thus, to discuss which one will fit your idea - let’s have a chat.