Testing is a required phase of each product’s launch, as well as software development. The whole process is divided into software testing levels in order to have a full cycle of assessment. There are numerous different testing levels that can be used to verify software behavior and performance. These testing levels are intended to identify any gaps in the development lifecycle and to reconcile the various stages. Requirement collecting, analysis, design, coding or execution, testing, and deployment are all defined phases in SDLC models. All of these processes go through various levels of software testing, including Unit testing, Integration testing, System testing, and Acceptance testing. 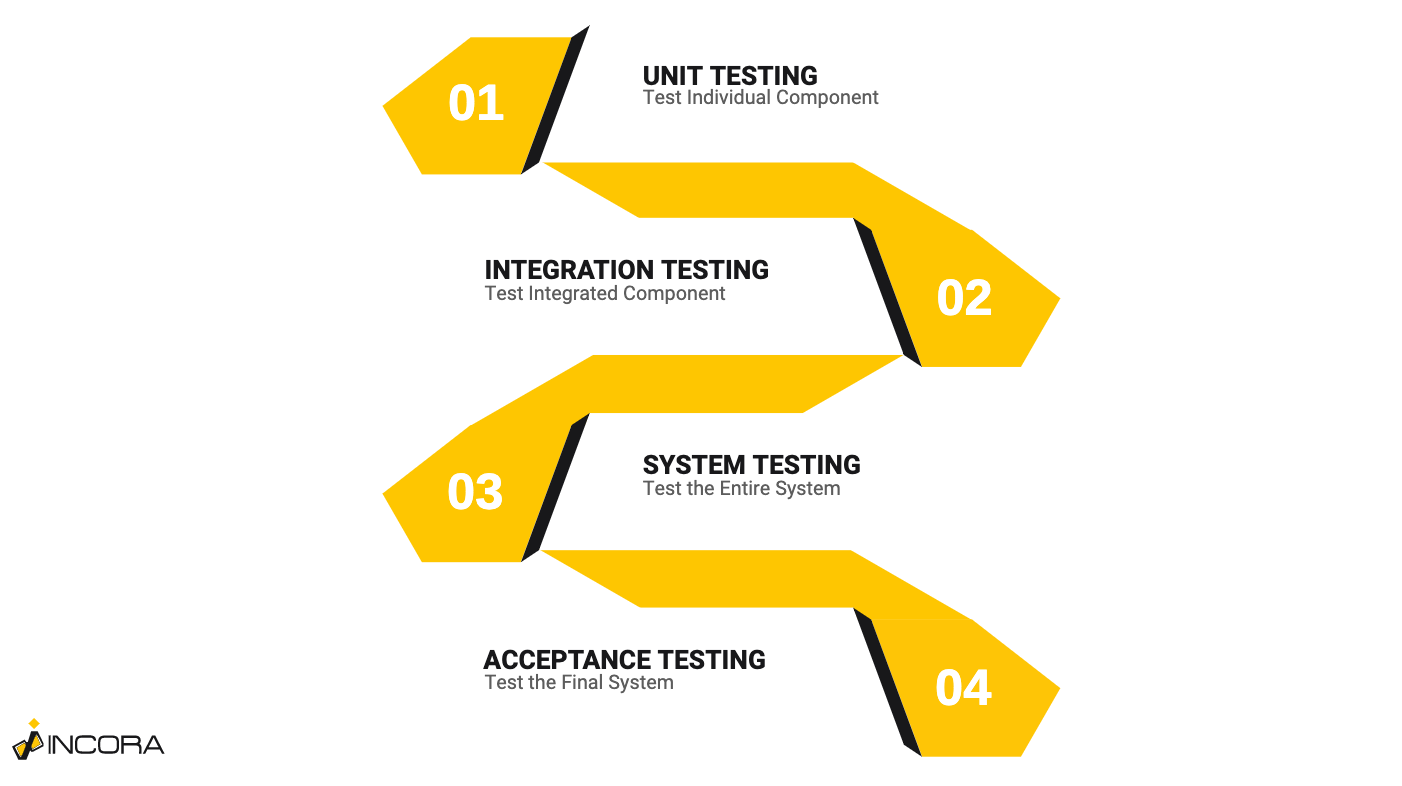 All software testing levels contribute to the value of the final product. Tests are essential for smooth performance, easier optimization, scaling of the software, better user experience, and of course bigger revenue in the long run. So, let’s cut to the case and outlook each of them.

Unit testing is the first level of testing where you check if an individual unit/component of software performs as designed.

Usually, it implies testing an isolated piece of code, such as a function or a method. For example, you give a function some inputs, and then check if the function outputs are correct. This testing method is quite simple, reliable, and helps to write better code. If writing unit tests causes difficulties for a developer, it means that the code is poorly designed.

It is a nice practice to run unit tests every time your code is changed. You need much less effort to find and fix defects during unit testing in comparison to the system or acceptance testing. When your test fails, only the latest changes need to be debugged. If you perform tests at higher levels, you need to scan all changes made over several days or even months.

To perform unit tests, your code must be modular. Such code makes it easier to build quick dependencies that are easy to understand and manipulate. Also, frequent unit tests will make your code reusable and simplify refactoring in the long run.

Unit tests should be focused on a particular feature and done in memory. During testing, the code shouldn’t use the file system or access the network or database. Moreover, it shouldn’t spin up a thread or call out to collaborators.

It is very important to focus on the tests that influence the behavior of the system. After you verify the code behavior, write more cases to ensure its performance.

To make the testing process even more efficient, you should find the most appropriate tool or framework for your programming language. At Incora, our developers mostly work with Mocha, Jasmine, and Cypress. Cypress, for example, is a great library for front-end development, often used by our React.js developers. This testing tool is very comfortable because it gives you the possibility to check the errors in real time. Also, it allows you to imitate requests for the backend. Our Node.js developers prefer Mocha, and those who work with Angular - mostly choose Jasmine.

Integration tests belong to the second level of software testing and are built on unit tests. A developer or a QA combines the units of code and tests if the resulting combination performs correctly.

Integration tests are more complicated because the environment is closer to production. They are harder to maintain because they touch a bigger chunk of code, use threads, and access a database and a network.

The main benefit of integration testing is the ability to identify and fix wiring and environment bugs, which can’t be found during unit testing. After you combine individual components in a group, you can easily see the faults in the interaction between them. Integration tests are necessary to identify incorrect or missing functions and fix different UI/UX bugs, errors in data structures, initialization, or termination. To make the testing process more effective, you should have well-designed documentation, which clearly defines the interactions between each unit.

There are four main approaches to integration testing:

System testing is the third level of the software testing process where a complete, integrated system is tested. The main purpose of the test is to evaluate the system’s compliance with certain requirements.

Very often software is only one element of a big computer-based system. System testing falls under black box testing which is focused on the external workings of the software from the user’s perspective. It checks how components interact with each other and with the system as a whole.

During System testing, you create detailed test cases and test each aspect of the application without looking at the actual source code. It is a great practice to improve users’ experience.

Normally, system testing is done by professional quality assurance engineers before it is introduced to the market. Testers perform different types of system tests, including usability, regression, load, recovery, migration testing, and others.

At Incora, our engineers are experienced in different types of testing. We focus on the user’s ease to use of the application and load time optimization. Also, our team performs functional testing where we try to come up with new ideas about missing functionality and create a list of useful features which will be beneficial for the product and its users.

Acceptance testing is the fourth level of software testing where a system is tested for acceptability. This testing is done to make sure that the product is ready for delivery and evaluate the system’s compliance with the business needs.

Alpha Testing is done by internal staff before the product is shown to external testers or customers. Alpha Tests take place in the development environment and provide feedback for the development teams. Then the feedback is analyzed to fix issues (if any) and improve the usability of the product.

Beta Testing happens in the customer’s environment. After the external testing, a client gets a better understanding of which product features can be improved.

Contract Acceptance Testing is needed to show if the software matches certain specifications predefined in a contract, which was signed with the development team.

Regulation Acceptance Testing makes sure the software is under regulations, both governmental and legal.

The fundamental purpose of system testing is to determine whether the system meets the requirements, and surely the main software testing levels we’ve highlighted above. However, there are some additional levels, that might be integrated on demand, like Regression Testing or Buddy Testing. All the products are unique, hence they require different tools, specialists, and means of involvement. But of course, there are basics everywhere, and in our practice, we definitely go beyond the ordinary possibilities in order to deliver the greatest possible outcome for our clients. See what we can do with your product, by dropping us a line!

What Does MVP Mean and How to Build it? - In-depth Guide