Web app development has become an integral aspect of many companies' operations. For development and expansion, every industry is increasingly looking to the digital world. All of this has enhanced the field of web app development as a result. With the need for high-end products, web app development has gotten increasingly complicated and sophisticated. The tech market is covered by a number of programming languages, tools, and frameworks. So choosing the tech stack becomes even more difficult. To pick up wisely, it’s better to differentiate which technologies and when to use them. This way you can benefit from each of them, and create the best developing experience you can imagine for your app.

Python, the most widely used programming language in the world, is frequently used to create effective web applications and data processing tools. When it comes to web frameworks, Python has a lot to offer. This programming language allows developers to produce the products they want without having to leave the confines of a single programming environment.

Many python frameworks make it easy for developers to quickly create scalable apps. These frameworks can handle everything from small to sophisticated websites. Out of numerous options, the main battle is going on around the choice of Flask vs Django. This leads to a comparison of the two, and while each of these python frameworks has its own set of characteristics, there are a number of things to consider before selecting one for your apps. Hence, let’s dive in!

Difference Between Flask vs Django

Django and Flask have established communities, are extensively maintained and respected, and provide productive methods for application development, keeping the focus on the unique aspects of your project rather than the fundamental framework. One of the most tempting features of Flask is how simple and clear it is to use, especially for newcomers. Django is a framework for rapid web development, pragmatic, maintainable, and secure design. While Flask includes less base code for creating a simple web app, the main goal of the Django framework is to allow developers to spend more time on new components of the application rather than existing ones. This is because Django’s release cycles are often longer and more rigorous in terms of stability. As a result, its updates find limited flashy new features but better backward compatibility.

Both frameworks, however, are today's top python frameworks. So, the battle is continuing. And to scan both options thoroughly, we need to check the features they are providing. This influences the end-choice of use cases in which Flask or Django may be needed. 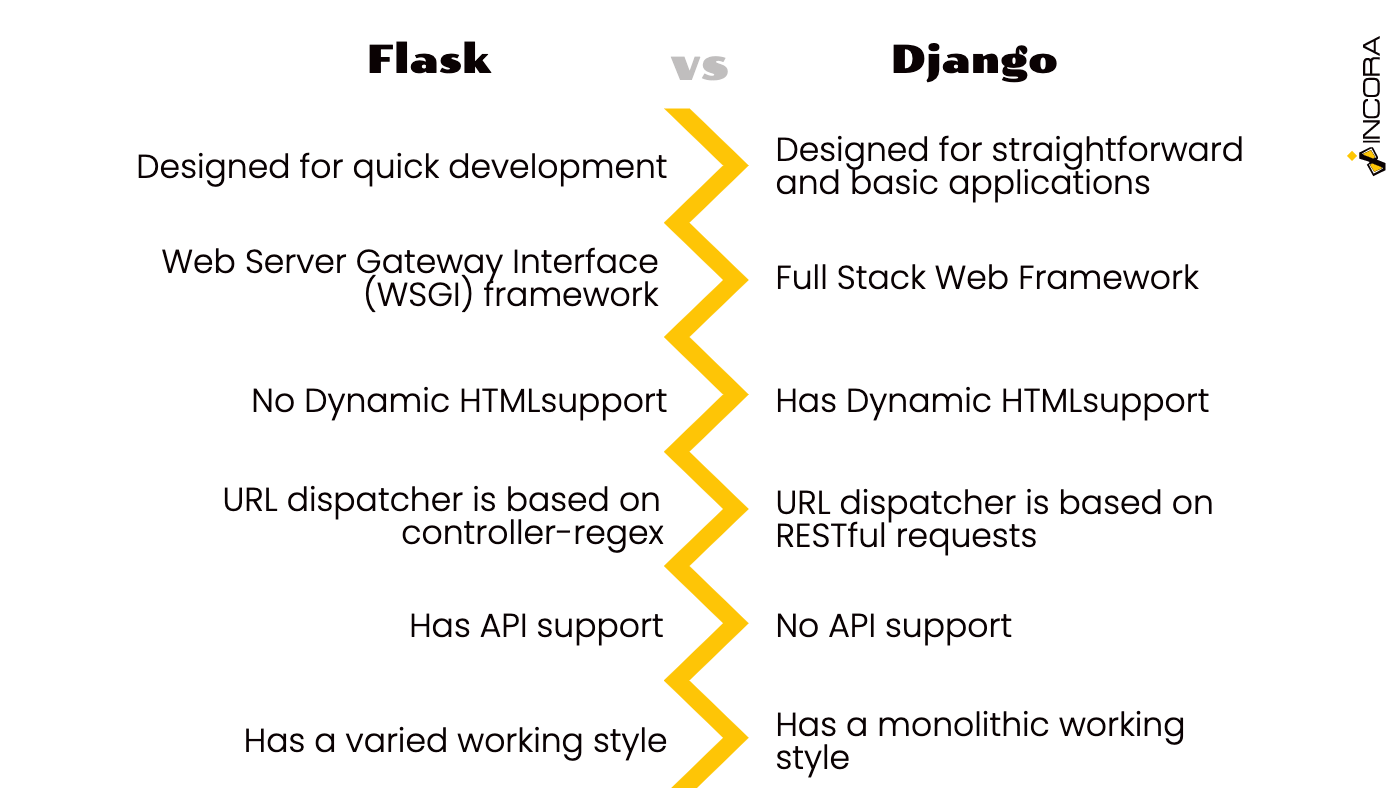 Flask has no implications about how data is kept, but there are several libraries and extensions available to help. As a plus it remains out of the way, allowing you to pick and choose which ORM (or ODM) is suitable for your application.

On the other hand is Flask, which does not support forms, however, the Flask-WTF extension connects Flask with WTForms. They may be used to automatically construct forms based on SQLAlchemy models, bridging the gap between forms and the ORM.

Key Benefits of both Python Frameworks

Flask is a light framework since it does not rely on other libraries. It allows sophisticated application web development to get off to a fast start. It allows the developer complete flexibility over the creation of apps. Because of that, you may play around with the framework's architecture and libraries.

As an extra advantage, Flask has a built-in server as well as a debugger. Its built-in unit testing mechanism allows for faster debugging, more stable development, and more experimentation. Secure cookies are an HTTP request property that provides channel security and prevents unauthorized access to the content. Finally, Flask is compatible with cutting-edge technologies such as machine learning, cloud computing, and so on.

Django is a free programming language that has been enhanced in terms of speed and functionality. Django is preferred by developers because it allows them to utilize it for standard functions with minimal interference from systems, protocols, and administration. Because the Django framework takes care of a lot of the labor needed in web app development, we can construct and deploy web applications in only hours. It is a fast, feature-rich framework that handles user authentication, content management, security, and scalability. We can construct a range of programs using the Django framework, ranging from content management to social networking websites. It offers a lot of resources and is well-documented, making it useful for both new and seasoned learners.

You may build an HTML output to document your API using Django. Moreover, it is used to restrict the number of API calls from a single user. As a great benefit, it comes with a built-in authentication system. So, we might say that this framework is built for quick web development at a high level.

Considering all the advantages with the overview of main features, it’s now easier to define use cases in which both python frameworks can be used. Thus, let’s specify in practice.

When to use Flask?

When choosing a framework, be sure to consider your project's specific requirements. Flask is a good alternative if you're utilizing NoSQL or no database at all. Flask is better suited to smaller, less complex projects with well-defined goals and shorter expected lifespans. Flask is a good choice if you're only building a static website or RESTful web service to feed your SPA or mobile app. Because it is smaller and has fewer layers, Flask performs marginally better.

If we need to make up a set of apps that will definitely be suitable for Flask development, here is a shortlist of examples:

Of course, Flask may be used in a variety of applications, of different kinds and industries. It doesn’t depend on the theme but on the main functionality.

When to use Django?

Django can be used to build data management systems, CRMs, platforms that consist of algorithmic operations, evaluation or verification systems, email newsletter platforms, solutions for data analysis and complex calculations, and lastly machine learning. In our practice, Django was mostly used for the development of eLearning platforms or the solutions that require complex architecture and extensive database structure, like Squibler.

So, which framework wins the battle? It all depends, as it always does. The decision to use one framework, language or tool over another is nearly completely dependent on the situation and challenge at hand. Surely, you need to consider the limits of the project. What is the budget? How much time do you have for development? What are your team's skills? What are some of the primary features of your app? Do you have to make an extensive database? Do you need a lot of flexibility in your app?

When a bunch of questions is answered, consult with tech specialists and consider their advice.

Flask provides complete control and is ideal for tiny applications that require testing. Django is a complex framework that needs much expertise, yet it is one of the greatest frameworks for developing sophisticated applications. As a result, pick whatever you want but master it in your app like a pro because they are in high demand and essential in the web app development market.