Recently, chatbots are gaining more and more popularity. The number of features and functions they provide and the overall advantage of their use can be seen with the naked eye. In fact, we have already discussed the role of chatbot integrations in Logistics and the benefits they bring. However, chatbots can be used not only for this industry.

Today, we will try to find out what are Chatbots, what purposes they serve, and if are there any successful chatbot use cases.

What are Chatbots' Use Cases?

The usage of chatbots can highly improve productivity, thanks to all of its features. They can be used in any sphere, yet, the best condition to use chatbots is when you need to cope with big data. There is no need to explain why software is more effective than a human being in circumstances when the process requires operating with a huge amount of data as soon as possible.

Additionally, chatbots are a great choice for answering routine questions, also known as Frequently Asked Questions (FAQ). In such situations, the program gets all the needed information from the source and is able to answer numerous numbers of clients at the same time. Therefore, the company can better operate its human resources, release more employees and assign them new, more important tasks.

Clearly, the most common type of chatbot is virtual assistants (VA). In this form, they can be implemented into most industries, successfully performing tasks. As an alternative, chatbots can be used for statistical analysis, marketing, analysis of user feedback, as sales agent assistants, content analysis, entertainment, etc.

It will be fair to say, that despite the usage of chatbots is growing in popularity, chatbots are still developing. Notwithstanding the fact, that there are a lot of diverse deep learning models and advanced technologies such as machine learning, there is still a lot of work to be done in order to make them full-fledged standalone software, that can work without human intervention.

The Evolution of Chatbots

For instance, there are at least two different generations: transactional and conversational chatbots. While transactional chatbots are able to perform only certain tasks and answers, that were programmed by their developers, conversational bots can use natural language processing. In other words, transactional bots work due to the predetermined scheme or menu, just like bank voice assistants, that provide the customer communication indirectly, requiring them to use various digits to perform actions.

Conversational bots are much more advanced, frequently based on Artificial Intelligence, and can both simulate human interactions and are able to natural language understanding, and recognize the customer's request. 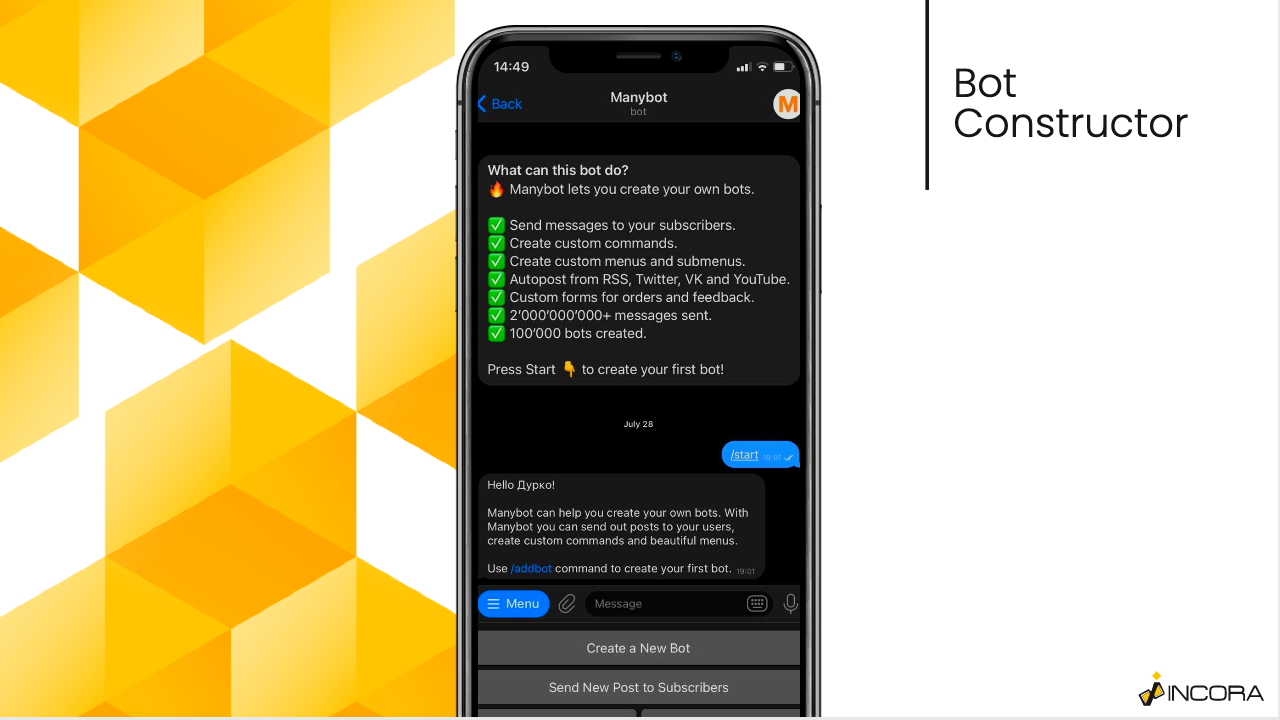 Let's start with the bot creators, that can help you to develop your own simple chatbot, in case you wonder how does it look like on the other side. Frankly speaking, there are two types of constructors:

Also, you need to understand, that advanced digital assistants can be considered full-fledged software only when they are able to natural language processing and understanding. Therefore, if you are willing to develop such a bot you will need to code a lot or hire the development team instead. Nonetheless, the foregoing examples are the most common type of modern chatbots: they are hybrids of transactional and conversational bots, that perform most functions through the menu and commands, yet, sometimes they are able to understand the user-written request. 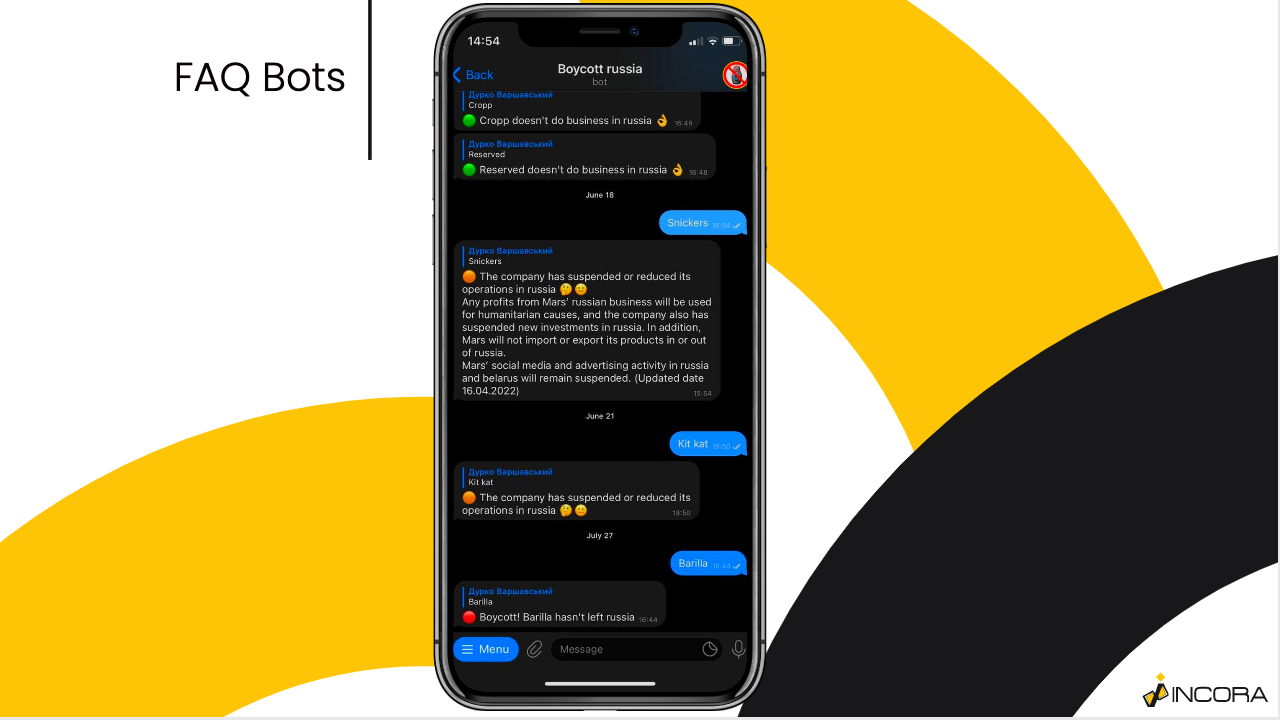 Actually, it is probably the most spread chatbot using purpose. As was mentioned before, the main advantage of such technology is to answer common questions. Thanks to their synthetic nature, chatbots can easily reply to repetitive questions. What's more, even simple bots can perform such operations. So, you can easily design your own virtual assistant in no time and implement it to your product, improving your customer support in no effort, knowing that the bot will do what it was designed to.

Nevertheless, if you don't want to limit yourself to simple questions or tasks, you can integrate an already developed chatbot. For example, Watson Assistant can easily be integrated into any product, connected to the database, and provide more advanced services, with the use of artificial intelligence technology.

Another sample of how third-party chatbots can be useful is Intercom Answer Bot. This chatbot service was developed specifically to work out customer support requests as soon as possible. As a result, it may be one of the most performative bots available. However, the developers warn, that the bot was created not to make it impossible to reach a real human agent, so it also provides the "connect with the real person" feature. Don't forget about it, when considering adopting this technology.

Finally, the Drift AI proposes an alternative solution - conversation. As a matter of fact, it is more like a standalone app-organizer, which provides numerous features aside from coping with customer support requests. As you can tell from the name, Drift proposes artificial intelligence to improve customer interactions. 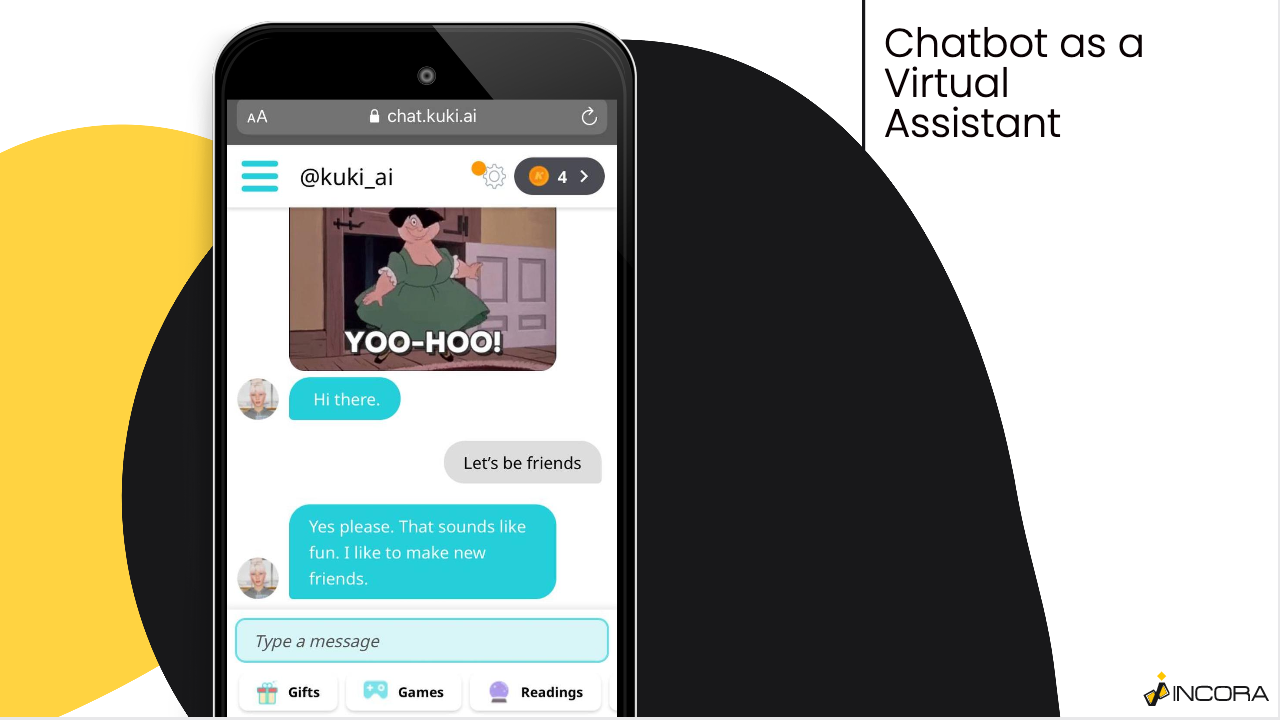 The best way to show the capacities of modern AI-based chatbots is to introduce you to standalone human-alike bots. 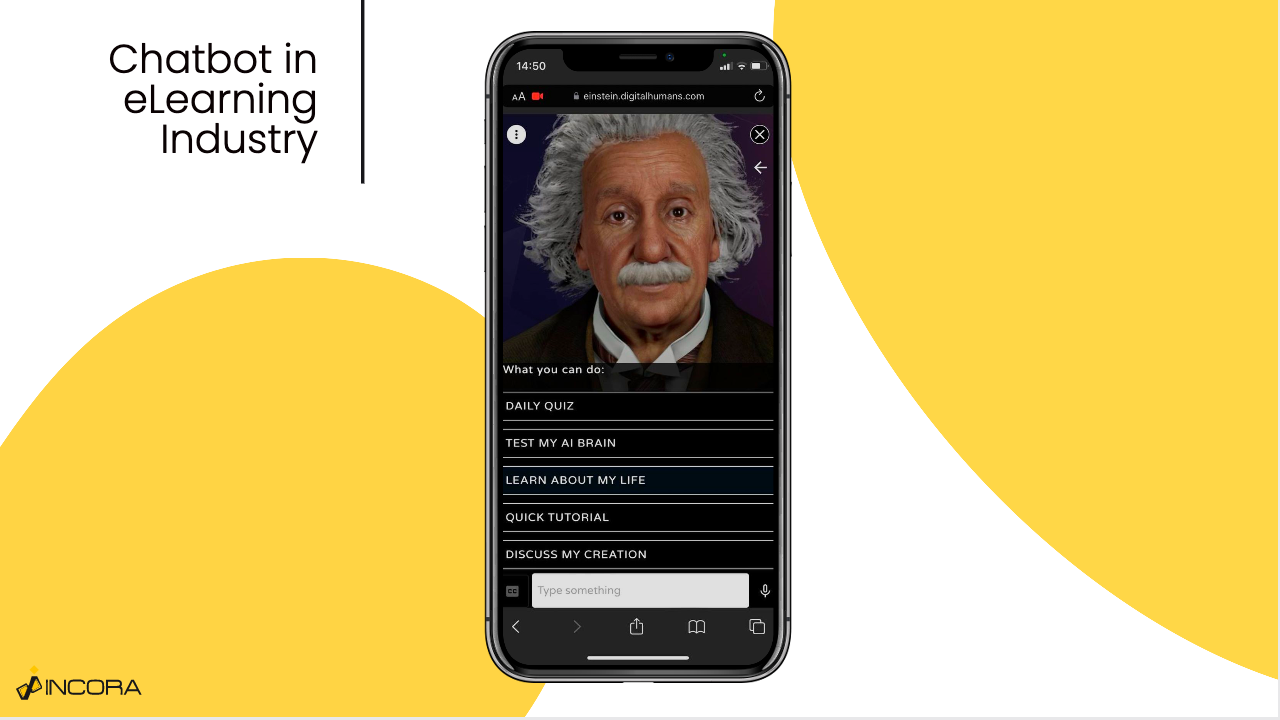 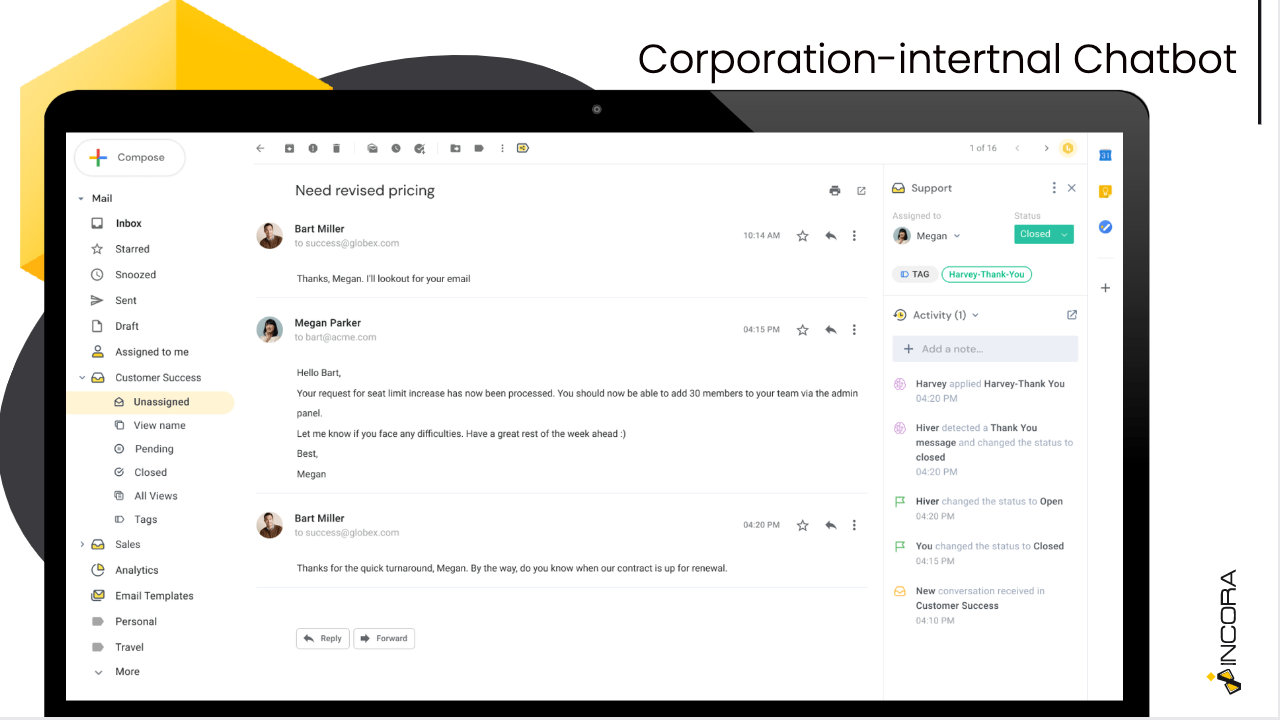 It wouldn't be a secret, that most corporations use various chatbots for different internal purposes. 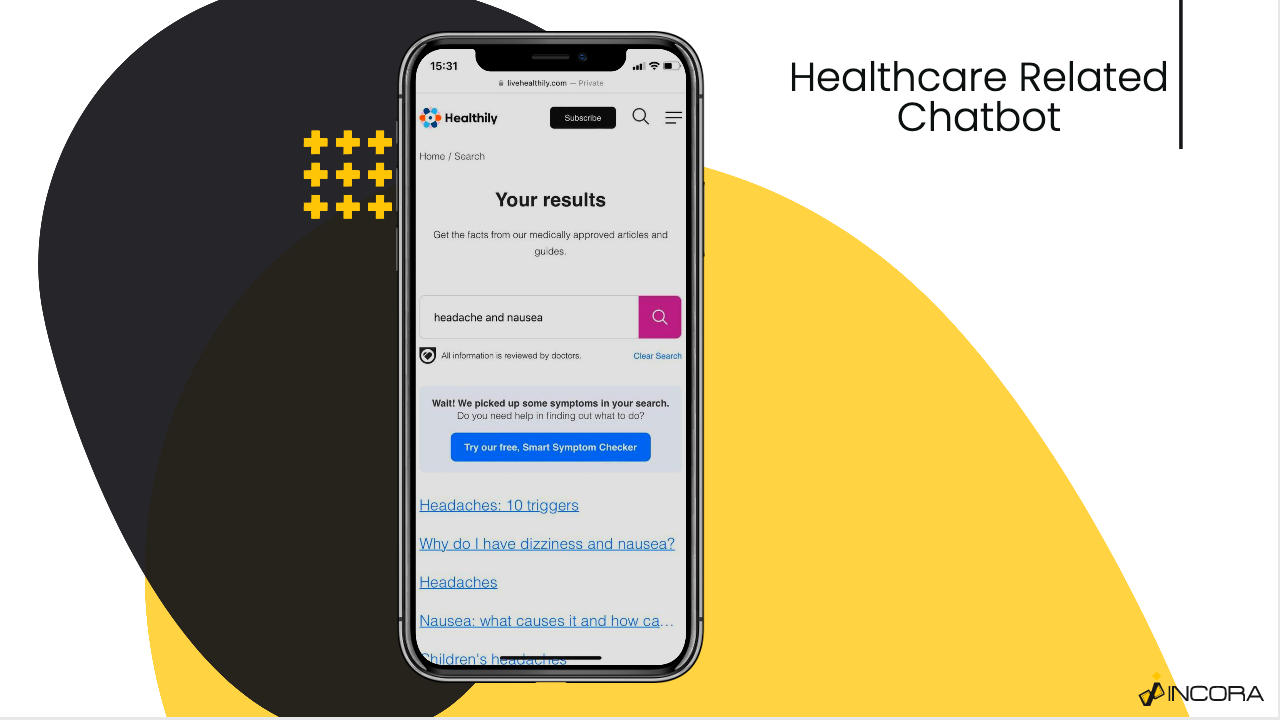 Bots are common in this industry as well. For instance, they can be used as a part of MPMS, or for simple communications between the administration and patients. For example, people who are going to visit the doctor can use the chatbot to check the doctor's appointment time. Yet, there are some non-trivial bots, that aim to help their users in various healthcare-related issues. 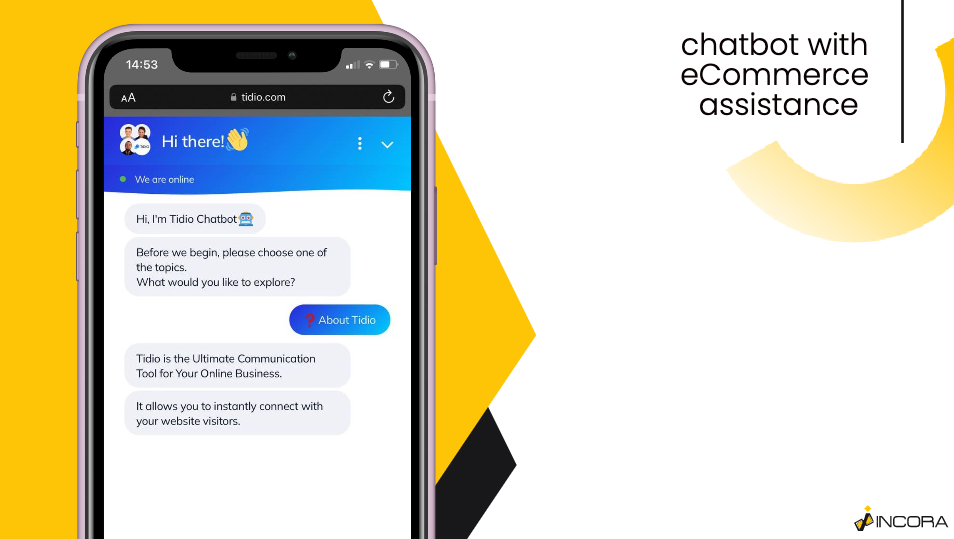 Unlike customer support bots, eCommerce VAs are designed to improve the commercial experience, whether it is a customer or merchant. There are a few various types of such bots.

These are the most popular and well-known bots. As a matter of fact, some of them are used integrations and AI basis. The reason is simple: most of them were developed by gigantic corporations, which have enough resources to create and support a full-fledged artificial intelligence. Moreover, some of these companies regularly propose to use their products for various third-party products.

Actually, there is a number of various chatbot usage examples. The main issue in categorizing and describing them is that each second website uses a chatbot, some of them are unnamed, and others are iterations of the previously mentioned.

Finally, most chatbots exist in various messengers and it may be hard to find those on, for example, Telegram, unless they are popular. Among such, it is possible to name boycott russia chatbot, which is used in order to avoid buying goods from companies, that keep doing business in russia.

Talking about the Ukrainian context, most companies propose chatbot services as well. For example, various banks use different types of bots to communicate with clients. Alternatively, chatbots are popular in the utility payments sector. They are used by clients to submit meter readings and pay the bills.

Nonetheless, it is obvious that chatbots have already become a common thing in various industries thanks to their usefulness and the number of benefits they bring.

How are eLearning Trends Going to Leverage Education?

TMS software Upcoming Trends: How will TMS look like?

Growing Potential of Chatbots in Logistics and Transportation