The mobile app development industry is still growing. It is already flooded with various apps, with diverse categories and tendencies. Obviously, these tendencies are shaping the future form of the market. This is why today we are going to talk about modern mobile app development trends in order to find out what features and app categories are the most relevant for the nearest future.

There is no need to explain what exactly a mobile app is. Nevertheless, it is worth reminding that mobile apps no longer apply only to smartphones. As a matter of fact, the number of smart devices is increasing. This creates additional markets and increases audience reach. For example, smartwatches, fitness trackers, or headphones with additional software have already become regular things.

Actually, it is a great idea to divide current and future trends into two types: the first one is relative to the creation of a full-fledged app from the scratch, and the second is about adding new features to already existing applications. The difference in the scale of both types is very large. Moreover, the development approaches vary as well.

Frankly, the name of this topic is more symbolic rather than literal. The list below consists of mobile app types or even the concepts of how to develop or upgrade them. The main difference between this subsection and the next one is the scale of development and the number of features to embody. 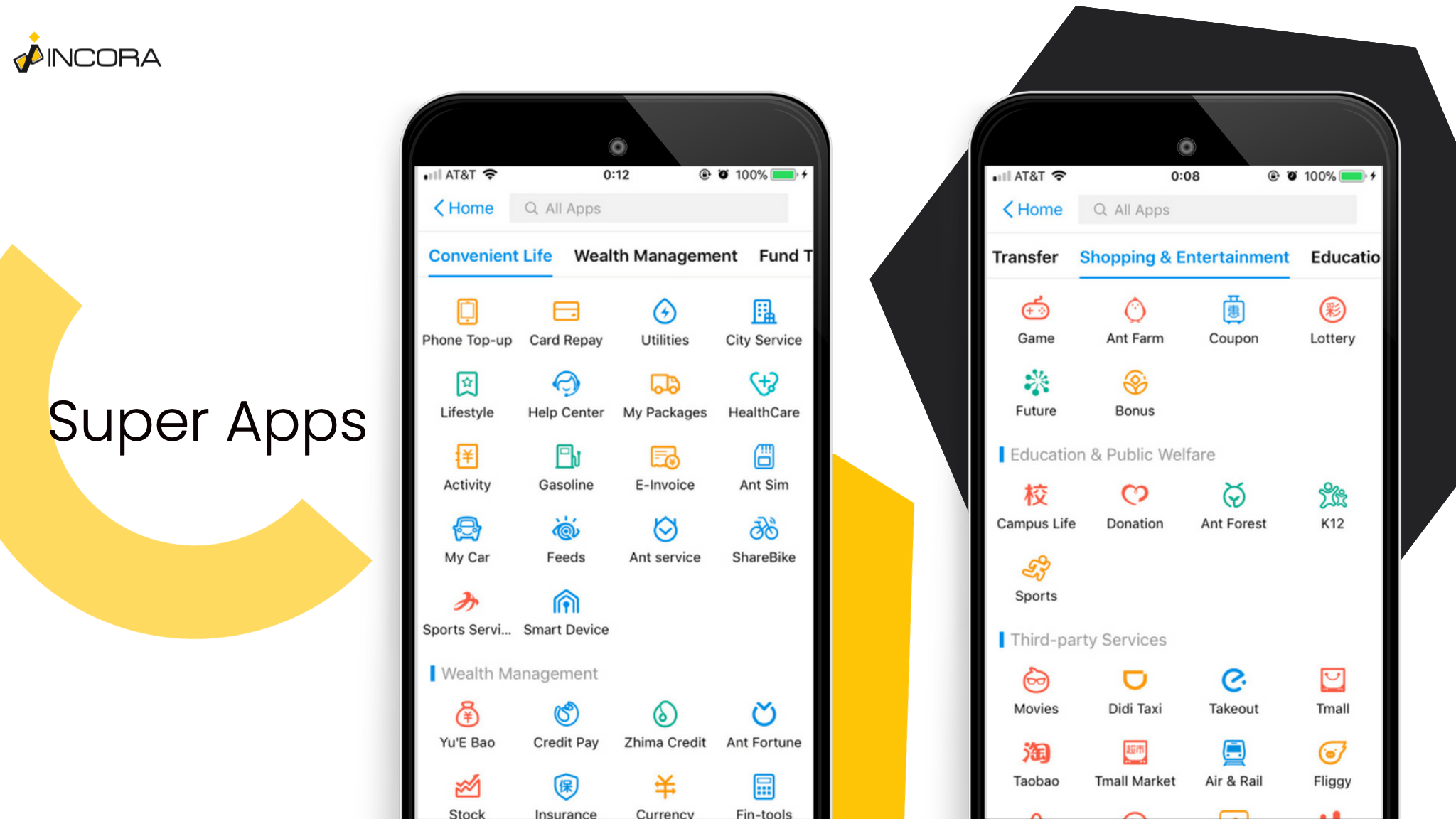 Super apps are the next level of mobile applications. At the moment, most of the available apps are single-purpose. In other words, modern applications have only one main usage goal or category.

For example, there are online banking apps, videogames, social media applications, eCommerce platforms, etc. Each provides a list of multifarious features but its main usage category is single. Obviously, we are not using the online banking application for texting or delivery app for posting memes. Each of them is used for an exact purpose. Of course, there are some exceptions like social media, which we can use for eCommerce intents but its main quality is communication with other people.

On the other hand, super apps become one of the most popular mobile app development trends in Asia. They are precisely the opposite of the usual single-purpose apps. Super apps can be considered a full-fledged platform rather than a single app. In fact, this type of application provides a number of different features at the same time. Super app allows the creation of mini-app implementations. Clearly, it is easier and cheaper than developing a standalone application. This is why many businesses, especially the small ones, are using this possibility to improve their online presence.

As a result, a single super app can enable dozens of usage purposes. At the same place, the user can check bank balance, send an SMS to a friend, and order delivery. There are a lot of pros and cons of using mini-app integrations, nevertheless, it proved to be effective. 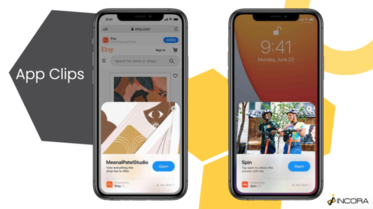 Talking about mini-applications it is worth mentioning instant apps. Frankly speaking, super apps can be considered as their combination. Moreover, it is easy to believe that one can not exist without another.

Instant apps are a part of mobile development trends as well. Actually, it is a technological development approach, that enables the possibility to make a beta test of an app without downloading it. At first, this tech was developed for Android OS, thereafter App Clips were created for iOS. The main difference between them is that instant apps can be tried out in Play Market only, while app clips can be integrated into any other application.

Apparently, the functionality of these apps is limited, it can be partly compared with mobile websites. Nevertheless, the fact that they are not using any space on the device and can be easily reached at any time compensates for it. 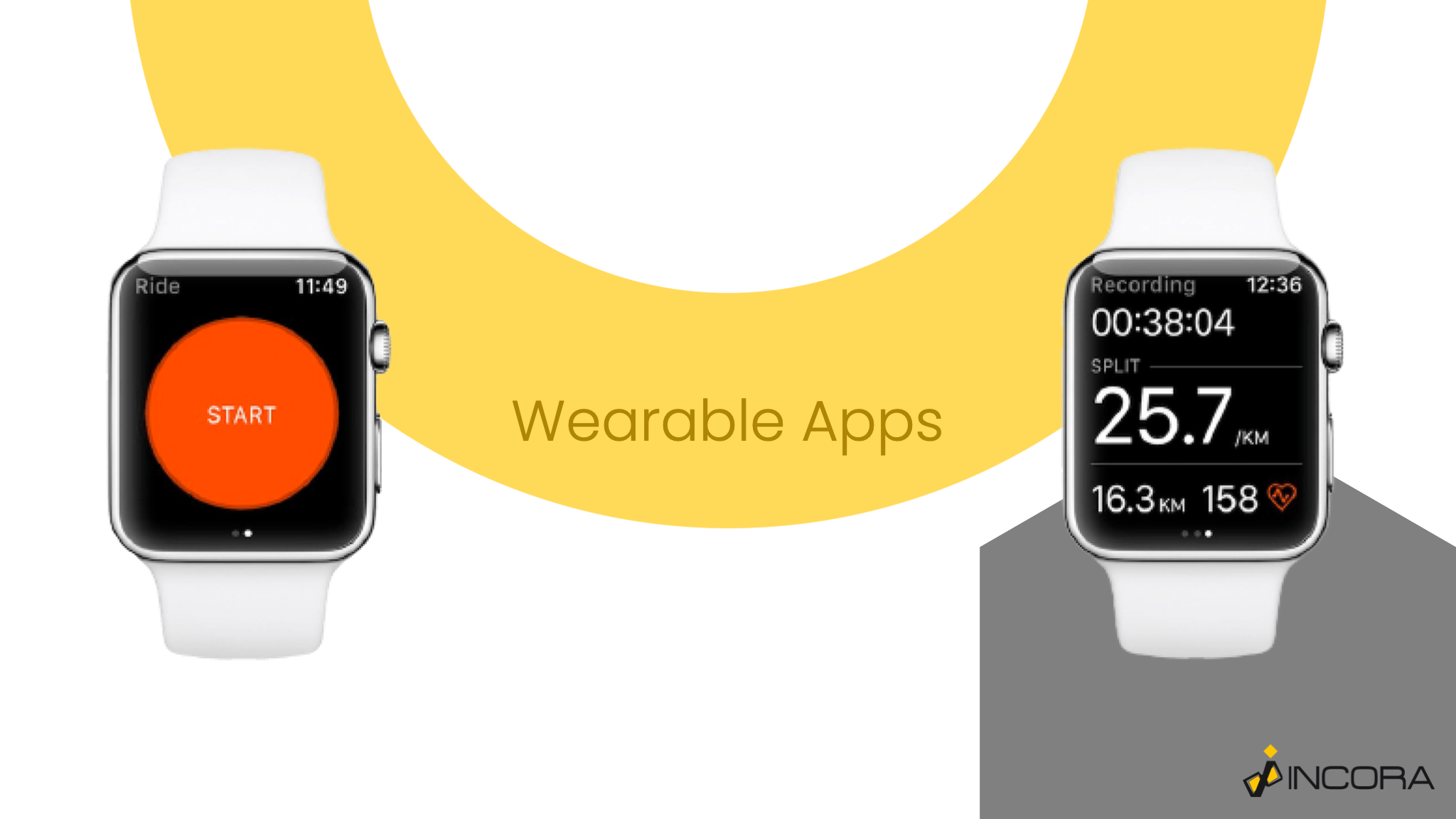 Wearable technology is another example of mobile app development trends. These applications are used for wearable devices. Mostly, wearable apps are created by the manufacturers of these accessories. For example, Xiaomi developed the MiFit app for their MiBand fitness tracker.

As a matter of fact, such apps are in high demand because they help not only to make sure the device is connected to the phone but to adjust its settings and enable various features. Other samples of wearable apps are various equalizers for Bluetooth headphones, etc.

Anyway, some of these additional devices have already become standalone platforms. For example, smartwatches such as the Apple Watch have grown their capabilities and now work as an independent medium, allowing third parties to publish their wearable apps designed for Apple Watch. 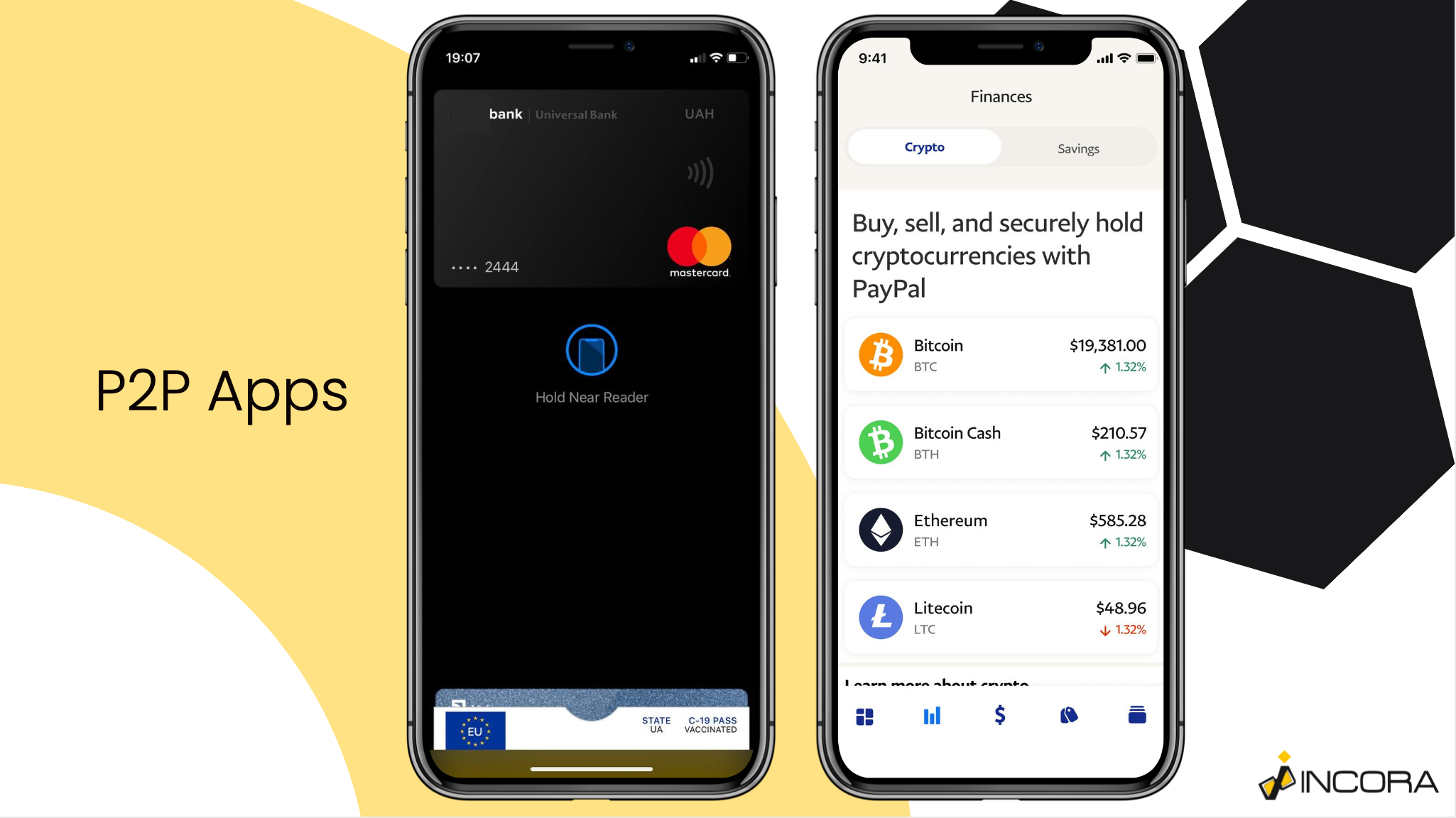 Peer-to-peer or person-to-person applications are the new types of simple mobile payments. The number of mobile devices, as well as their capabilities, is increasing. At the moment, the smartphone is a multifunctional device, enabling various features that simplify our routine.

For instance, among the latest solutions and techs should be noted the NFC module. A smartphone with this implementation can be used instead of a credit card. Moreover, in addition to the technological side of the issue can also be identified software aspect. Using p2p apps allows money transfer between the users even without the NFC modules.

Actually, p2p apps are third-party applications, where you can add your bank details and perform the transfers using these apps. As a result, the user can forget about ATMs and cash withdrawals at all, performing all the transactions online. Moreover, the user-friendly interface of the app usually helps not only to spend money but to track the spending.

In addition to full-fledged applications, we can also name add-ons and additional features for existing applications. Some of them became possible thanks to new technologies and some are the result of UX/UI improvements. 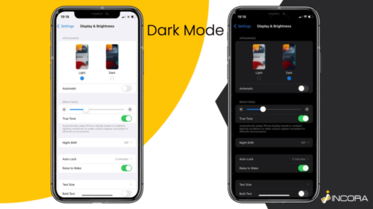 It is also known as a night theme. The dark mode is created to improve the user experience of an app. Actually, it is a display adjustment, when the usual “black-on-white” theme is changed into “white-on-black”. As a result, the users see fewer bright colors as well as less blue light, which can impact the person’s health.

Usually, dark mode is proposed as an alternative color theme for applications or program interfaces. Therefore, smartphone users can choose it if they want. There are a lot of possible pros and cons to the usage of the dark mode on mobile phones. Nevertheless, the possibility to adjust the app for the specific needs of the user is obviously a great idea. In addition, the development of the dark mode feature is not a hard task. 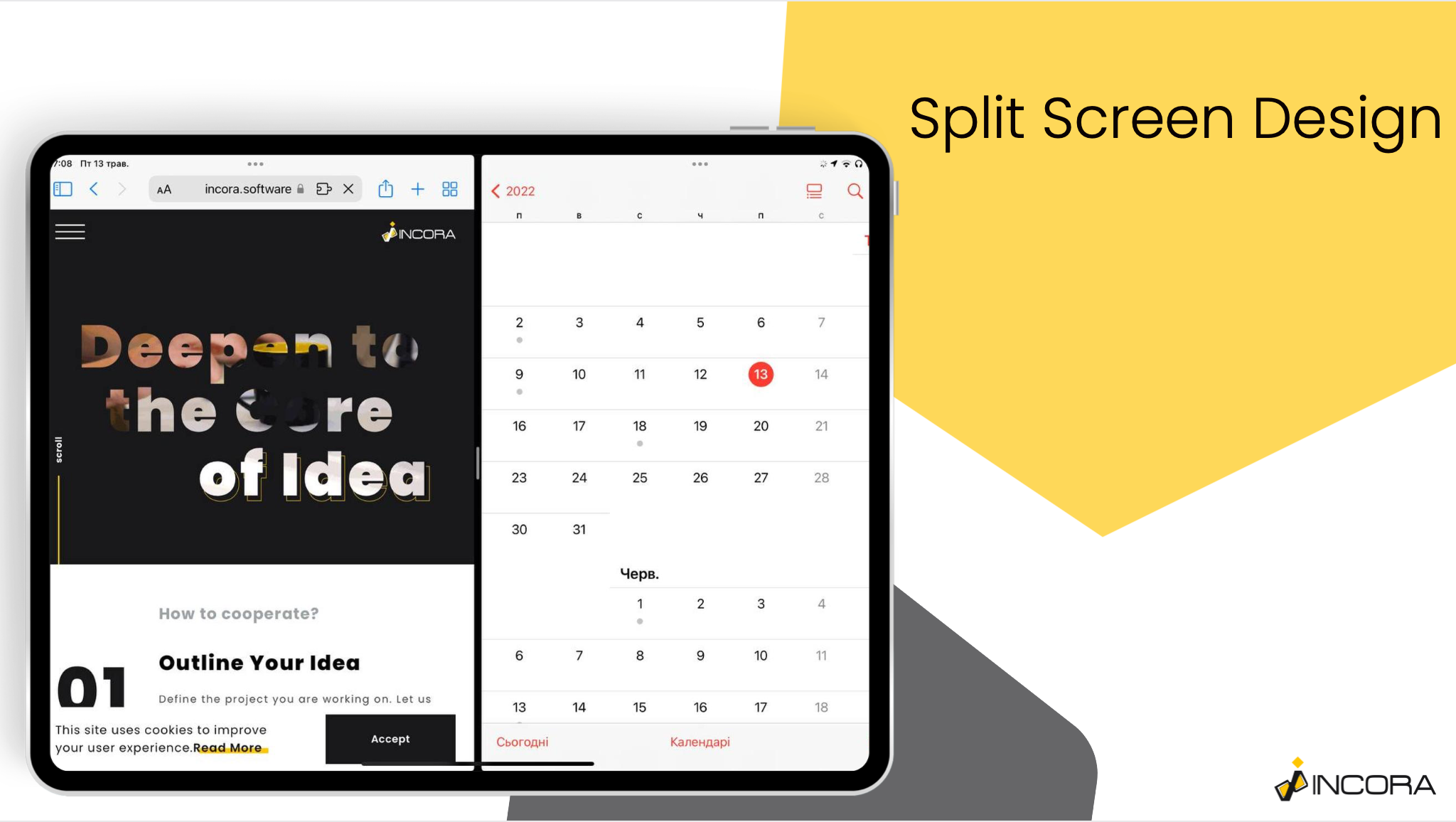 At the moment it may be one of the most useful features to embody in your app. The split screen design is possible on various OSs such as Android or iOS, even though they are working differently.

The split screen design allows easy multitasking. Especially, if your app provides video content. So, the user can watch the video and simultaneously surf the app, read posts or perform other acts without interruption. The best examples of correct usage of this feature are Telegram messenger or Safari browser.

In the case of iOS, the app creates a smaller pop-up window with the video, which stays on top of other open apps. The other way to use the split screen feature is to divide the screen into 2 independent parts, each of which can display various apps, fitting to the ordinary screen size. Actually, it is the approach, which is used mostly on Android devices. 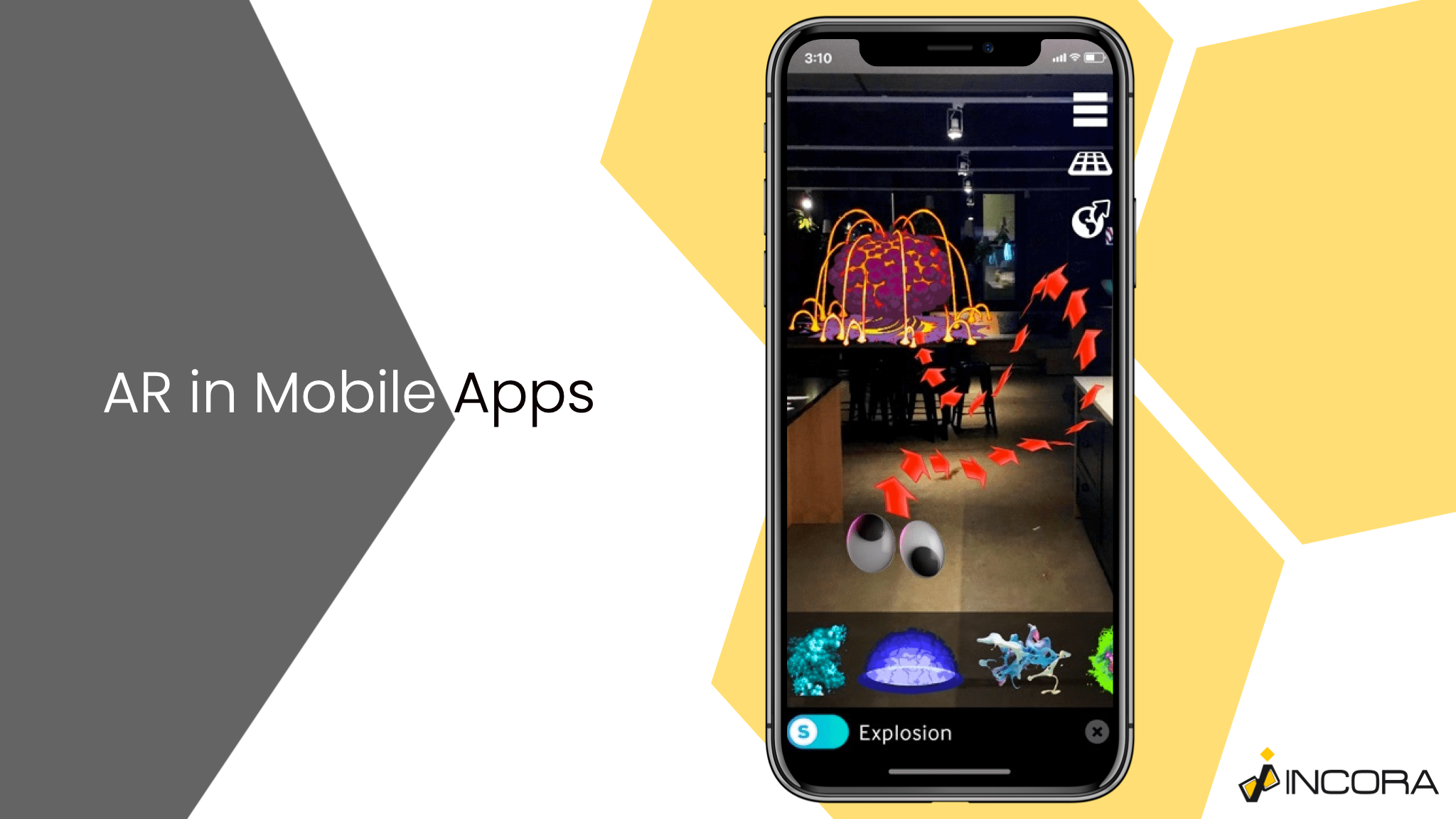 The AR tech is growing its popularity. Virtual reality technology in mobile apps enables to combinate the real world with the virtual one using modern technologies. For example, the user can create a virtual object and check how will it look as if it was real. There are plenty of purposes to use this feature.

At first, the most common were AR masks for social media. Apps like Snapchat or Instagram used this technology to entertain their users with ridiculous face changes. Nevertheless, at the moment AR is becoming a very useful instrument in Mobile Commerce. Using augmented reality in mobile apps allows checking how will the product look in real life. For example, if the new table will fit the design of the kitchen, or choose which sneakers fit better for the customer’s look. 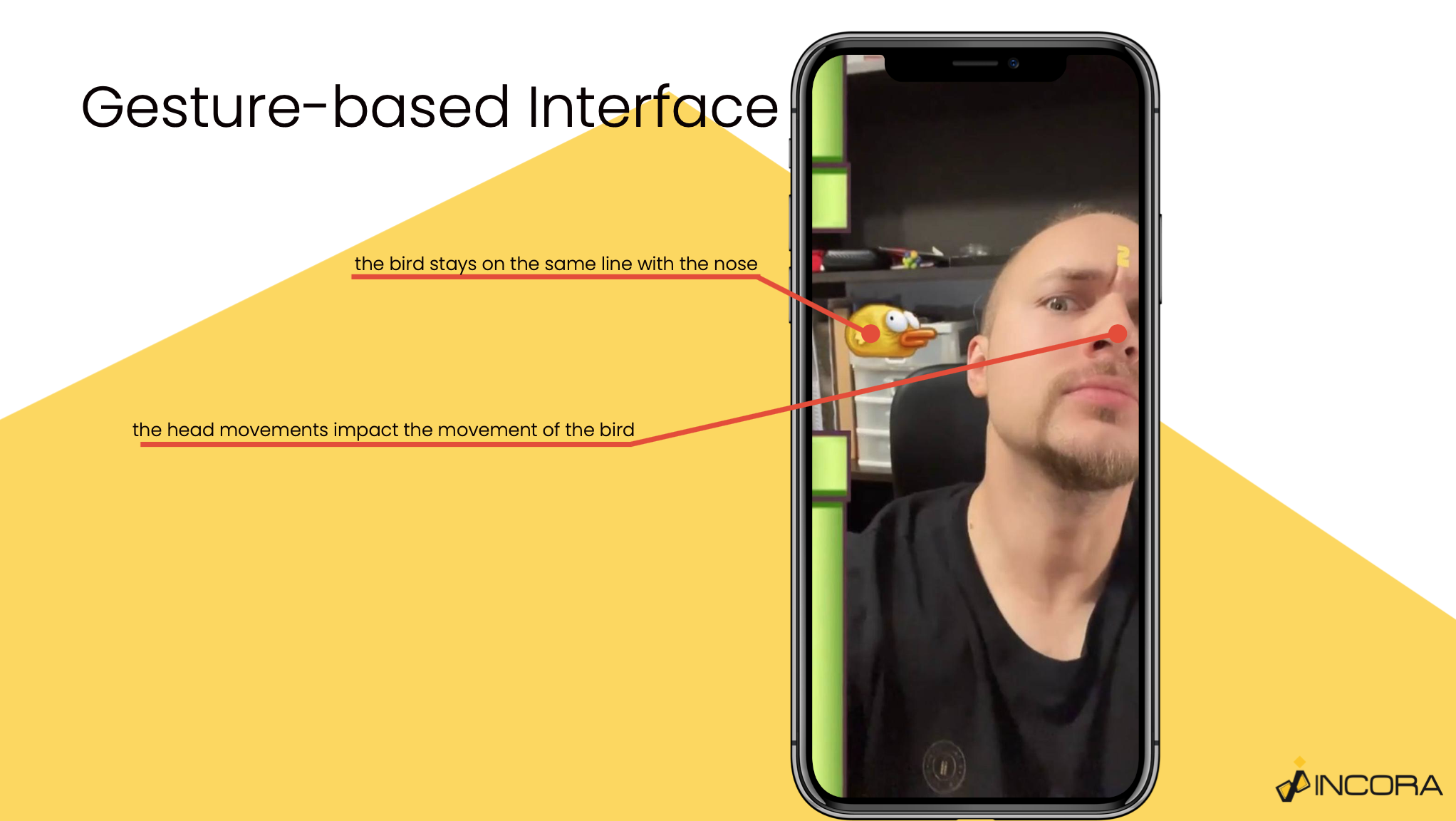 The camera in modern mobile devices is definitely one of the most useful tools. It is already used as the main one. For instance, FaceID technology distinguishes the user's face from others and allows using it instead of the password. Moreover, the tech stack used for this feature also can be used to distinguish the location of the user’s face and its movement.

Even if such interfaces are still pretty raw and need to be improved, they can be already used. 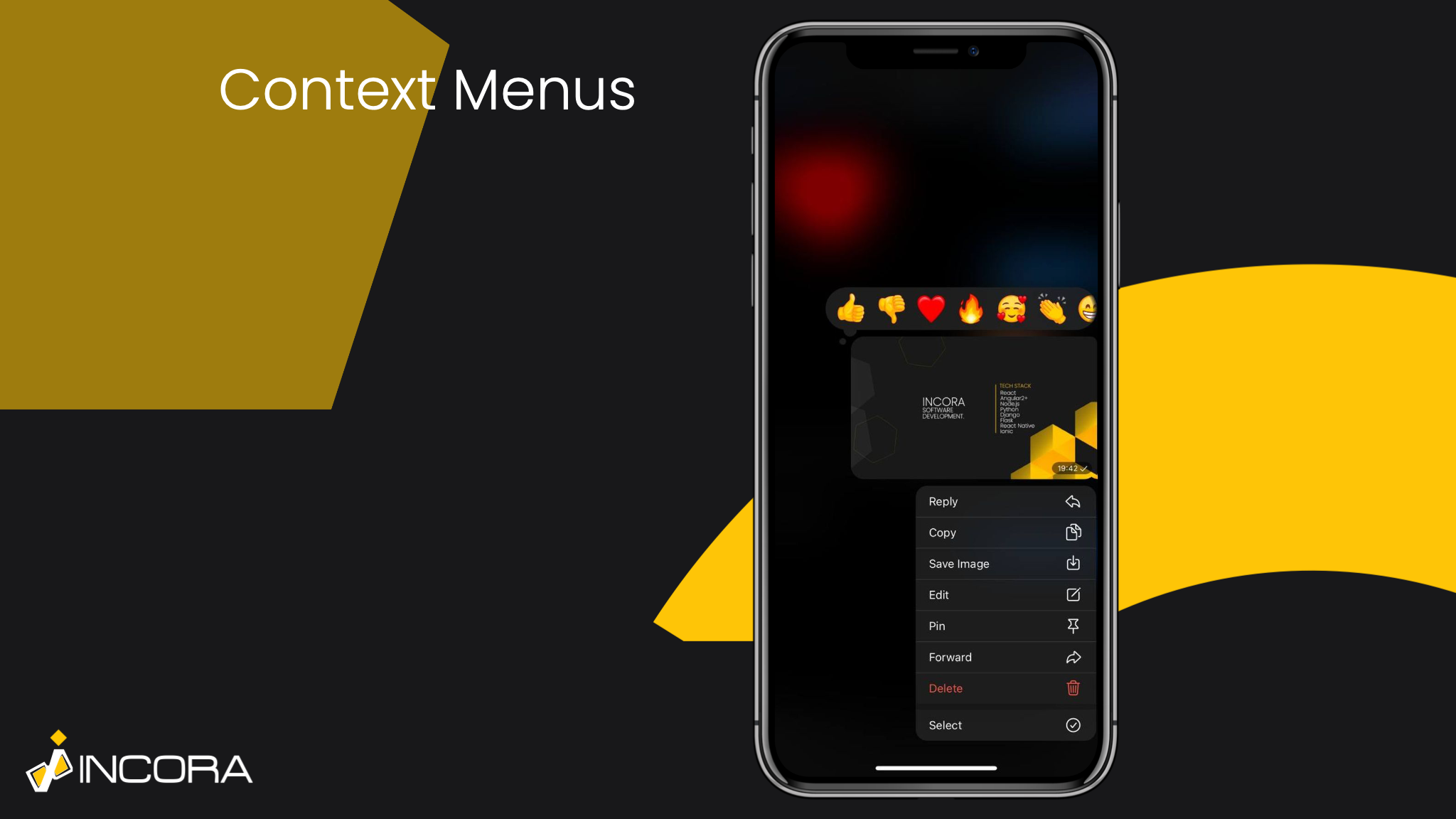 Talking about various interface features for the mobile app industry, it is worth considering the context menus. As a matter of fact, it is a peek&pop technology, that enables great customization features.

In simple words, context menus are additional settings for various objects or processes in the app. Using simple swipe or press interactions the user can get a pop-up menu with various acts to perform.

For example, most of the messengers are already using this tech. So, if the user wants to edit, delete, reply or forward the message, all he has to do is to press and hold it. Thereafter, the context menu will pop up and the user can choose what to do next. 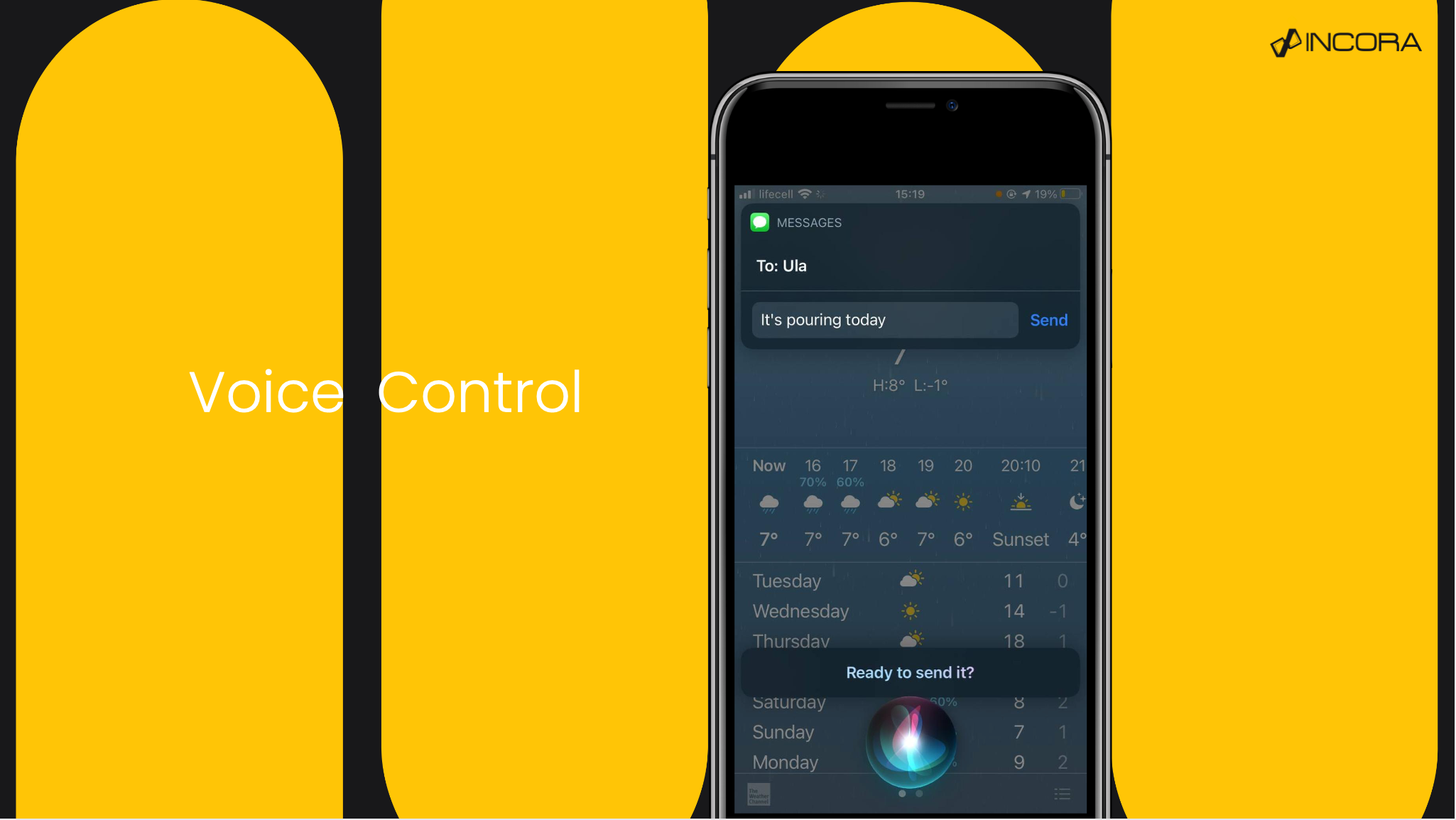 Actually, most modern smartphones provide all the resources for the implementation of voice control. For example, each mobile OS has a voice control setting, that can be used by mobile users who struggle with health issues and may require additional accessibility.

Therefore, each smartphone can use a voice control interface. Nevertheless, the number of mobile apps that use voice control and recognition feature is surprisingly small. The most popular type of such apps is pronunciation checkers and spelling correctors, which are used to improve the user’s speaking skills. 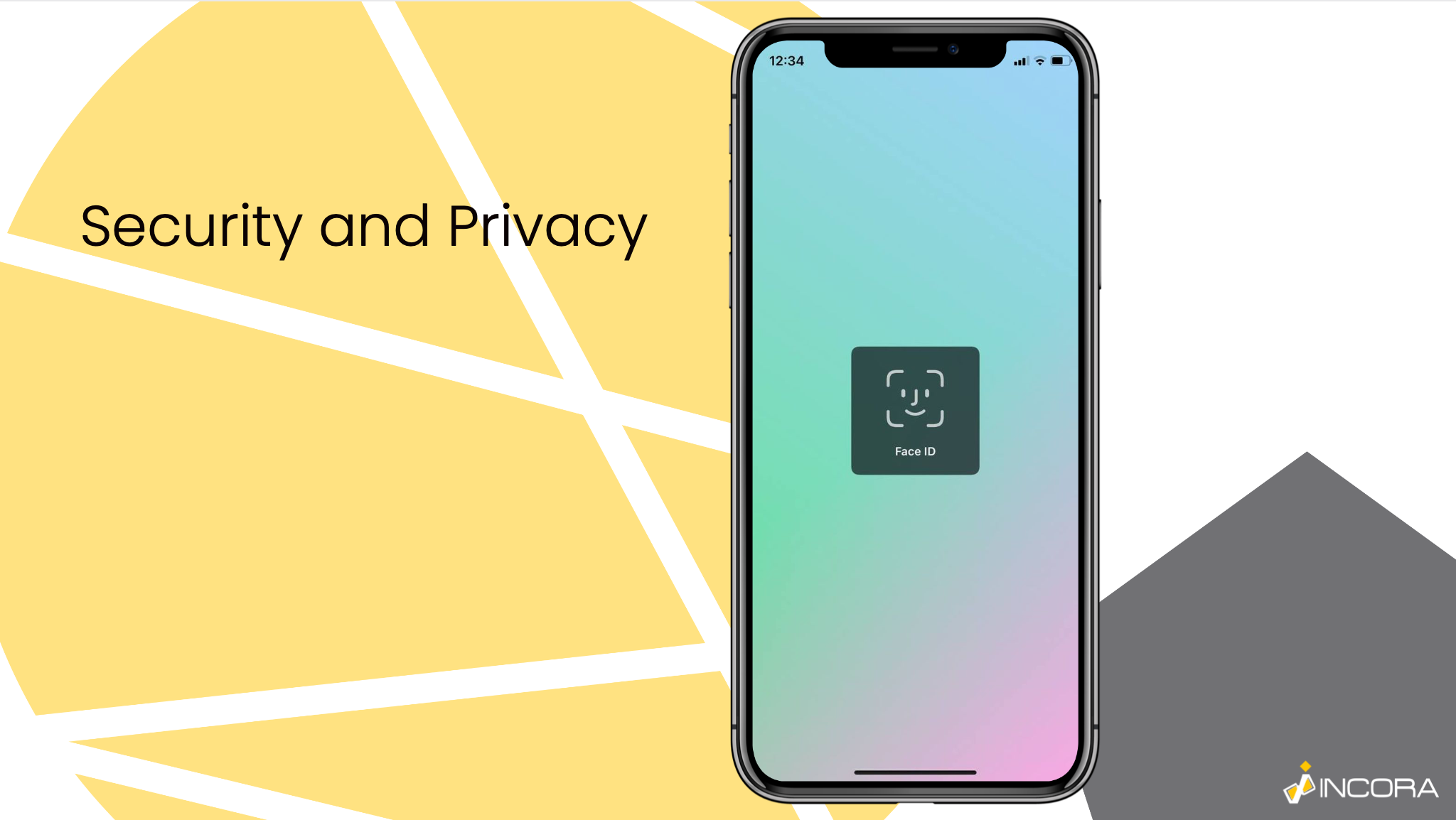 One of the most essential mobile app trends is the improvement of the security of an app and information about its users. It is clear, that the more advanced the technologies are - the more vulnerable they are. This is why the improvement of security and privacy measures will be always relevant.

Modern technologies are partly helping to improve security issues. For example, as previously mentioned FaceID, as well as TouchID, and other biometrics are used as additional identification methods. The number of apps that started implementing such security measures is growing. They integrate Artificial Intelligence, which is equal to the creation of blockchain technology impacted the protection of the privacy data industry. Looks like in the nearest future the amount of various security and protection methods will increase.

Of course, the list of these latest trends in mobile apps is not final. Something trendy can unpredictably appear at any second. Nevertheless, the previously mentioned features and technological advancements are definitely worth considering.

Our development team can easily help you to choose the right combination for your future app. If you bring us your idea, we will make sure it will be embodied by the most experienced mobile app developers.

Types of UI Design Patterns Depending on Your Idea