The free apps sector is growing all time and it seems that this growth won’t stop in the near future. For example, the mobile apps market is full of “shareware” apps. It means that they are free to use, but their functions are limited. This “free” status doesn’t mean that there is no revenue, quite the opposite, their popularity shows that there are a lot of opportunities for app monetization both for mobile and desktop applications. So, let’s find out how free apps make money. 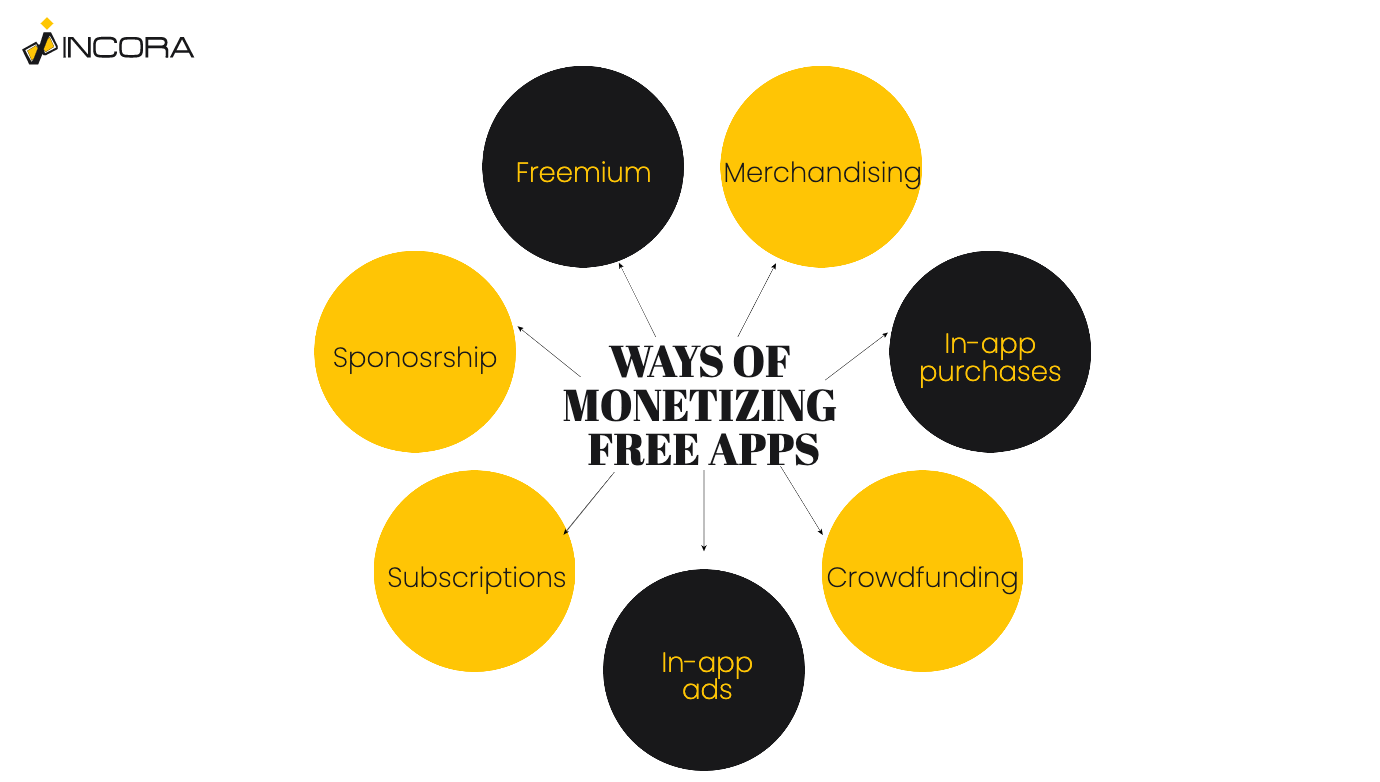 Nowadays, this small amount of paid apps is associated with high-quality, while the free applications are mostly considered to be a bad version of a paid product. Such thoughts are easy to understand. Actually, everything is quite simple: during the discovery phase even before the development, the company conducts business analysis in order to estimate the price of an app and the requirements to cover the expanses for the creation and support of the final product. Meanwhile, despite the coverage of production, such research should also take into account the possible income. Given all that, the final cost of an app is being formed.

This is the moment when you may wonder how free apps make more money than if the users are not paying anything for downloading or using these applications. Moreover, how can free apps even compare to the paid ones' quality? You may answer that they aren’t, but it is important to understand that such beliefs are not exactly right.

There definitely are low-quality apps, which are coping the features of more successful and famous products such as, for example, Photoshop, but there are also a lot of free applications, which can compare or even sometimes overcome the paid analogs.

It is clear, that most of these apps also include various app monetization strategies, such as in-app purchases or, for example, diverse types of subscriptions. Actually, the amount of app monetization ways is so huge that it is hard to count all of them. Thankfully, it is possible to determine today’s most popular and effective strategies and categorize them.

The Variety of the App Monetization Ways

Actually, most of the schemes described in this list are very obvious and each of us at least once faced a few of them. Nevertheless, all of them have already proven to be effective. Hence, let’s start from the easiest, thereafter the most popular to implement, and end up with the most interesting and promising ones.

Advertisements are the most obvious and maybe the easiest way to earn money. Nevertheless, there are some requirements as well. In order to interest the advertiser, you need to have an audience at least. This is why your app must be interesting or informative. The longer time users spent on it - the better result is because you can show them more ads. Moreover, it is a great sign, because it shows that users like it and even may recommend it to their friends or leave a positive review.

Also, it is important to understand that there are different types of advertising. The most simple as well as the most annoying one is using the banners or pop-up videos. Despite the fact that most people hate such ads, which may result in losing the audience, there are ways to simply avoid such advertisements, which results in losing money. Actually, the best way to advertise anything - is the native ad. It is when the advertisement is implemented into the app naturally, that most users won’t even understand this is the ad. It is hard to do, so it costs more as well.

There are dozens of ways to advertise, for example, the engagement approach, when the user can skip the ad, but get something as a reward for not doing it; or the gamification method of the ad as well. Such advertisement types help not only to avoid users' annoyance but also increase their engagement giving them different bonuses.

All types of digital advertising are using a referral marketing strategy. It is a complex of collecting and analyzing user’s data, as well as monitoring the visitors' traffic in order to show the most relevant ads for the specific user.

It combines partnership and referral advertisement. It means, that the money-making process depends on two different aspects: the number of clicks on the referral link and the product or client you advertise.

Referral marketing strategy is more like a huge system, which consists of a variety of different schemes and instruments which are combined to perform the best result possible.

On the other hand, all the types of digital advertising could be used not only as of the main source of revenue but also as an instrument to provoke other money-making methods.

Talking about various alternative ways of income it is hard not to remember the in-app purchases. Using such an approach can help to avoid other app monetization methods, as well as can be combined with them. Usually, in-app purchases are about creating additional content or options, which simplify the usage of the app or create new opportunities. Mostly, in-app purchases are used in different games or marketplaces. They can be divided into consumable and non-consumable, such as in-app currency or permanent bonuses, and items.

The other type of in-app purchase is “freemium”. It is a combination of two words: “free” and “premium”. The freemium model usually limits the basic functionality, urging users to buy a premium subscription with advanced options or features.

In other words, the freemium model is one of the possible types of subscriptions, with a slight difference: it gives a free basic version of an app, so you are not obligated to pay for the freemium subscription. On the other hand, it allows simplifying and improving the user experience of using the app. Such an approach may be even more effective than regular subscriptions. The allowance to use basic options for free encourages more users. Moreover, the more unusual options the app offers, as well as the higher quality of the final product is, the better the freemium model works.

Usually, both of the foregoing methods are present in free applications as legit ways to get rid of annoying advertisements.

The first one is about creating different types of subscription ranks. So, creating the difference between available options or amount of content for subscribers, depending on how much do they pay. Such an approach is particularly used on the Patreon service, where patrons can be divided into different groups with limited access or features available.

The second one is about the period when the subscription is valid. It can be for a day, a week, a month, a year, etc. There are no actual standards or limits, so every company can offer its own valid time periods. The best way to implement a subscription is to use a payment API.

Talking about Patreon subscriptions it is hard not to compare it with Crowdfunding. It is actually a great alternative, which, nonetheless, is pretty similar. The main difference between crowdfunding and different types of subscriptions is that crowdfunding is a one-time donation of various amounts of money.

There are a lot of Crowdfunding services. The main issue is that most such projects use the same crowdfunding strategy. Usually, it can be schematized as:

Such a plan is very simple and obvious, the main part of it that can vary is the encouraging one. So the crowdfunding strategy depends on your idea and your people involvement skills. But crowdfunding is actually a great tool, that often covers up all your expenses and sometimes even helps to earn more money than you expected. A great example of it is a Potato Salad Kickstarter, when instead of 10 dollars helped to raise approximately 50 000$ thanks to the satire and humor of its owner. This example proves that correct communication with the audience gives the opportunity not exactly for the app monetization, but at least to cover the expenses for creation and optimization.

How to Choose the Best Way?

Considering the huge amount of various ways of app monetization, it is hard to tell exactly which method is the best one. All these money-making procedures are working great individually as well as combined altogether.

Nevertheless, the best solution is to choose only a few of them and to make sure they are working correctly in pairs, compensating each other and giving users the choice. For example, you can implement one of the types of digital advertising, adding the alternative such as the one-time in-app purchase in order to get rid of the ads, or the freemium model with the ads-free function and additional bonuses.

Also, the crowdfunding strategy works fine with different types of subscriptions. It is better to avoid using advertisements in this case, because in such a scenario, people most likely are ready to pay more money for high-quality content.

The foregoing list of possible ways to make money is not final. Free apps could also use merchandising or sponsorships. Such methods can be a great addition to your app monetization, but they could be realized only if your product is popular or innovative accordingly.

Our Incora team is willing to help you not only to make a profit but to create a unique product. To make it happen we can not only help you to choose the best tech stack possible for effective application work but also decide which app monetization tools would be the most efficient.

How to Hire Development Team for a Startup

Manual: From a Traditional Application to SaaS Software