Briefly About the Experiment

Probably everyone already heard of ChatGPT. However, some of us still haven’t figured it out, or even checked the real capabilities of this innovative technology. Therefore, we tried to test the features of this specific AI, in order to be able to analyze its true potential for now and try to prognosis possible future usage purposes, i.e. define whether it is truly a full-fledged technology, that can simplify the process of automatization of numerous tasks and industries, or it is an overhyped tech, which is no more than an additional tool for the specialists. 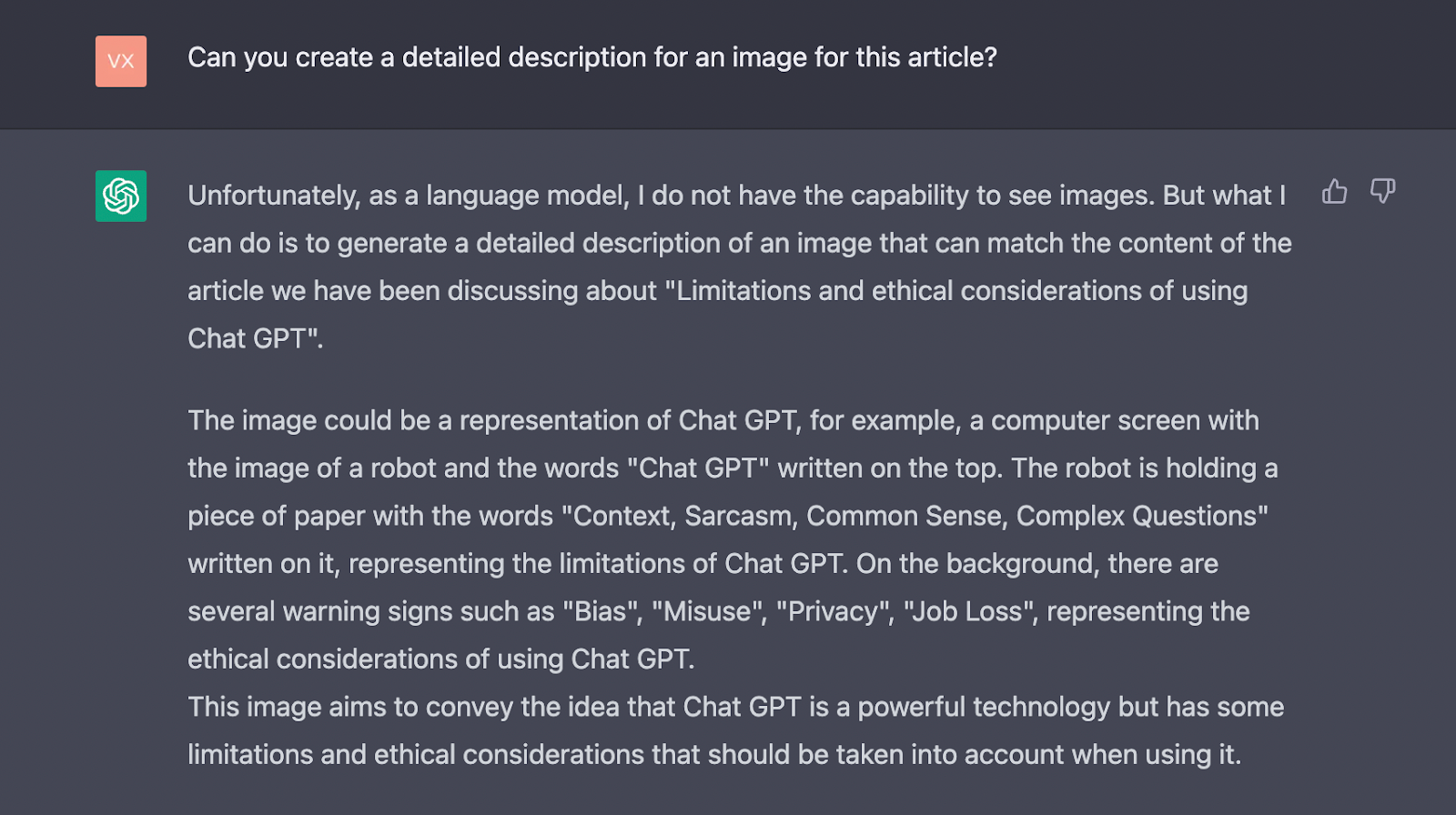 In order to do so, we prepared a few articles, specifically for Chat GPT, where we are showing its raw results, analyzing them, and giving our own feedback on what is it, whether it is worth paying attention to, and, eventually, how to properly use such technology. The first article from the list - is a plain sample of AI-generated content, which shows the approximate results and capabilities of Chat GPT for now. We did not interact with it at all, meaning that all text is fully created by this Artificial Intelligence, with no extra editorship. Also, it is worth mentioning, that today we are considering only one of the possible use cases for Chat GPT - content creation. To rephrase it, in this specific article, we are not talking about the coding capabilities of this AI, just the general text. By testing different prompts for ChatGPT, we've together come up with such a structure:

I. Introduction
A. Explanation of Chat GPT
B. Importance of discussing limitations and ethical considerations
II. Limitations of Chat GPT
A. Limited understanding of context and background information
B. Difficulty in understanding sarcasm and irony
C. Lack of common sense and general knowledge
D. Limited ability to understand and respond to complex questions
III. Ethical considerations of using Chat GPT
A. Bias in training data
B. Misuse and abuse of the technology
C. Impact on job displacement and loss of human interaction
D. Privacy and security concerns
E. Responsibility of developers, users, and society
IV. Conclusion
A. Summary of limitations and ethical considerations
B. Call to action for responsible use and development of Chat GPT
C. Future research and development in the field.

So we've asked OpenAI to generate the following text, bearing such structure in mind.

Chat GPT, also known as Generative Pre-trained Transformer 3, is a state-of-the-art natural language processing (NLP) technology developed by OpenAI. It has the ability to generate human-like text, making it useful in a variety of applications such as chatbots and conversational interfaces.

As with any new technology, it is important to discuss the limitations and ethical considerations of using Chat GPT. These include potential biases in the training data, the potential for misuse, and the impact on job displacement and human interaction. Additionally, there are privacy and security concerns that must be addressed. By understanding these limitations and ethical considerations, we can ensure responsible use and development of Chat GPT in the future.

One of the limitations of Chat GPT is its limited understanding of context and background information. This can be a drawback when the model is used in a specific domain or industry where it needs to understand the specific language, jargon or references.

Difficulty in understanding sarcasm and irony

Another limitation is its difficulty in understanding sarcasm and irony, as well as recognizing and generating them. This is because Chat GPT is based on a dataset of text and it may miss the non-literal meaning behind words.

Chat GPT also lacks common sense and general knowledge, which can be a limitation in certain applications such as question-answering and problem-solving. The model is based on statistical patterns and correlations rather than understanding the world through common sense.

Limited ability to understand and respond to complex questions

Lastly, Chat GPT has a limited ability to understand and respond to complex questions. While it is able to generate coherent and fluent responses, it may not be able to fully understand the nuances of a question and provide a complete and accurate answer. This is especially true for questions that require reasoning, abstract thinking, and understanding of multiple perspectives.

One of the major ethical considerations of using Chat GPT is bias in the training data. As the model is trained on a large dataset of text, any biases present in that data will be reflected in the model's output. This can lead to unfair and inaccurate results, particularly for marginalized groups. It's crucial to have a diverse and representative dataset in order to mitigate bias and ensure fair and accurate results.

Misuse and abuse of the technology

Another ethical consideration is the potential for misuse and abuse of the technology. Chat GPT has the ability to generate human-like text, which could be used for malicious purposes such as spreading misinformation or impersonating individuals. It's important to have safeguards in place to prevent such misuse, and to hold those who misuse the technology accountable.

Impact on job displacement and loss of human interaction

The use of Chat GPT may also have an impact on job displacement and loss of human interaction. As the technology becomes more advanced, it may be used to automate certain tasks that were previously done by humans. It's important to consider the impact of this on workers and to find ways to mitigate it, such as retraining programs or new job opportunities.

Privacy and security concerns are also an important ethical consideration when using Chat GPT. As the model generates text based on the input it receives, it may inadvertently reveal sensitive information. Additionally, the model's output may be used to track and profile individuals. It's crucial to have robust privacy and security measures in place to protect user data and prevent misuse.

Responsibility of developers, users, and society

Summary of limitations and ethical considerations

In summary, Chat GPT is a powerful natural language processing technology with a wide range of applications. However, it also has several limitations including limited understanding of context and background information, difficulty in understanding sarcasm and irony, lack of common sense and general knowledge, and limited ability to understand and respond to complex questions. Additionally, ethical considerations such as bias in training data, misuse and abuse of the technology, impact on job displacement and loss of human interaction, privacy, and security must be taken into account.

Call to action for responsible use and development of Chat GPT

To ensure responsible use and development of Chat GPT, it is important for developers, users, and society to be aware of these limitations and ethical considerations. It is crucial to use the technology in a way that maximizes its benefits while minimizing potential negative consequences. This can be achieved by developing and implementing guidelines and best practices for the use of Chat GPT, and continually monitoring and evaluating its impact.

Future research and development in the field

Furthermore, future research and development in the field of natural language processing is crucial to address the current limitations of Chat GPT, and to push the boundaries of what is possible with this technology. This can include researching ways to improve the model's understanding of context and background information, developing methods to recognize and generate sarcasm and irony, and finding ways to incorporate common sense and general knowledge into the model. Additionally, research on ethical considerations such as bias mitigation, privacy and security, and the impact on society should be continued. With these efforts, we can ensure that Chat GPT is used in a responsible and beneficial way.

As we can see, Chat GPT is able to write full-fledged text, which has a logical connection between different sections. As a result, each next sentence follows from the previous one or continues its thesis.

However, the text is obviously too general and it is hard to argue with the possibility to figure out, that the author of the text may be a machine, not a human being. Moreover, the text itself is full of tautologies and repetition of what has already been said before. So, the first conclusion is: despite the possibility to use this software for content creation, it is worth spending some time editing the final outcome.

There are more reasons to edit the text, than regular mistakes or repeated words. Actually, editing may take even more time and effort, in case you are willing to get more detailed and “man-made” content. The statement, that “It(Chat GPT) has the ability to generate human-like text” is not actually 100% true. We have to admit, that the level of generated results is very high. Yet, even the developers of OpenAI are warning their users, that the quality of the end text can decrease if the requested content becomes more voluminous or complex.

The final reason for editing the text, generated with the use of the OpenAI solution is not as obvious, as previous ones. For instance, in case you are considering it a great tool for generating countless content for your web pages or apps in no time, we will have to disappoint you. Such an approach is against numerous guidelines and policies of various search engines. For example, Google considers such texts as “Spammy automatically-generated content”. So, routine usage of such methods with no additional editing, most likely, will bring trouble promoting your website.

Eventually, despite the fact, that Chat GPT understands the SEO principles, is able to generate possible Keywords, and write texts, using such SEO keys, it can’t compare them with the actual situation. In other words, OpenAI has no access to relative and up-to-date information and statistics. In other words, not all promoting materials of ChatGPT were correct.

Ultimately, it is very easy to find some extra misconceptions related to this technology while testing. For instance, the idea of using it for pure coding, or as a Wikipedia is also inaccurate. Do not forget, that the database, the chatbot is based on (approximately 570GB) is outdated and too limited, compared with the possible alternatives. So, yes, we don’t believe, that ChatGPT will become a “Google killer” as some individuals are claiming. During the testing of its capabilities, you will definitely face some bygone concepts, mistakes, and results, which are not working as were supposed to. One of the reasons for it - ChatGPT is not connected to the Internet. So, It can’t simply find recent information on the subject, as well as to find more points of view on the same topic.

Summing up all the above, we can say, that this software is undoubtedly one of the most innovative real-life chatbot examples and has a wide range of possible use cases. However, we recommend you consider it not as a way to fully automate your content creation but rather as a great and very useful tool, which can significantly improve your results in this field.

How Voice Technology can upgrade your app? [Intro Guide]