Research is probably the most important phase of any project. It is the only way how to weigh all the pros and cons to make the final decision - if the project is worth starting, whether it must be changed, or should it be canceled for good. Actually, the number of various statistics, reports, research, and other useful data, that can be analyzed is enormous on the web.

On the flip side, quantity does not always mean quality. Therefore, to perform high-quality research you will need to spend some time searching for reliable statistics on the topic. Assumably, Cryptocurrency and Blockchain industries are the best examples of such cases.

In fact, despite the fact that both cryptocurrency exchanges and blockchain projects are relatively new and keep improving, they have already become the ones, with the most accessible statistics. Thanks to their popularity, the variety of usage possibilities, and the main principle of transparency and openness, each person can easily find variable stats about these technologies. For instance, you can find the infographics for the growth of the market, its total cost, find the lists of the most popular blockchain networks, blockchain spending charts, the most favored and expensive crypto assets, cryptocurrency exchanges rate, etc.

Nonetheless, some of them can be speculative or inaccurate. Also, some of the aspects are still unexplored. For example, due to the recent fall of the blockchain market, there is a number of research and reports about the possible financial crisis, caused by the cryptocurrency market growth. In particular, some of The Bank of England representatives have already compared this case with the 2008th Meltdown, claiming that the current situation, when there are no actual regulations on the crypto market, is dangerous and it is worth searching for solutions right now.

At the same time, there is barely any discussion about the dangers that blockchain applications bring, except for potential harm to ecology. Actually, the discussion about problems of blockchain security is also starting to gain popularity. However, the number of such discussions is insignificant compared to the same topics in the field of cryptocurrency.

But let’s dive deeper into the situation and analyze modern available statistics on this topic, so we can make at least some more accurate assumptions.

As was mentioned before, the main principles of this industry are transparency and openness. Such a statement is possible thanks to the in-house research, provided by various platforms and blockchain companies in this financial sector. As a matter of fact, it may seem that blockchain technology itself is just a small part of the overall financial services, proposed on the market. For instance, Blockchain.com is one of the pioneers in the cryptocurrency market. This private company allows to track various cryptocurrency transactions in real-time thanks to their “Explorer” feature. Apart from monitoring various transitions related to Bitcoin and Ethereum (the most popular cryptocurrencies at the moment), they also regularly conduct research and make reports on various topics published in public access. 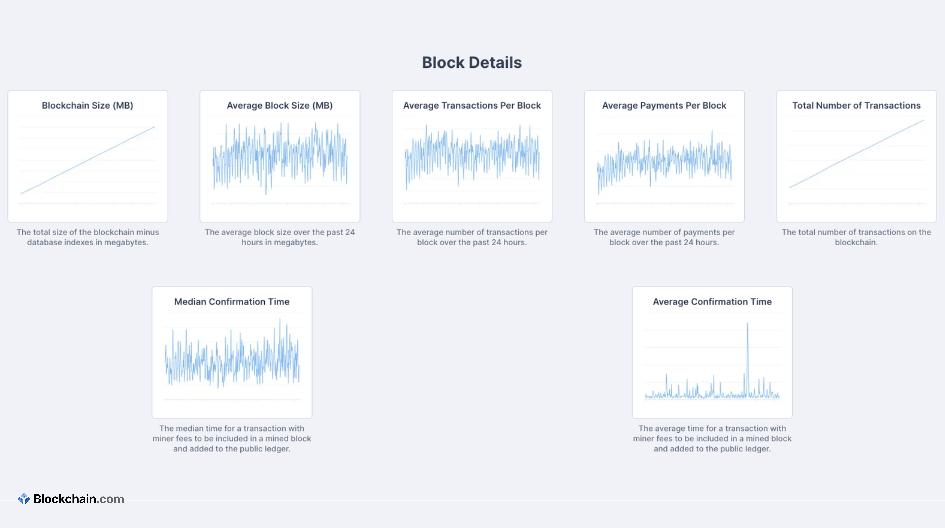 Actually, this case is not an exception, most statistics on the topic, whether it is about cryptocurrency transactions or the blockchain technology market, are provided by third-party companies or crypto enthusiasts. While the official Ethereum site is providing general information about the principles of this technology, most statistical data can be found on other web resources. Therefore, we are going to ignore official websites, giving preference to relatively independent reports.

Moreover, the number and quality of statistics, related to cryptocurrency are much higher than about blockchain. In fact, probably each cryptocurrency platform provides actual infographics on various assets. Thus, there is no actual need and opportunity to attach the full list of such infographics. Yet, for a clearer example, we can propose you examine some additional websites.

In addition to the previously mentioned Blockchain.com, we can name BitInfoCharts, a platform that shows recent stats of various coins, or CoinMarketCap, which shows the same data.

The Nature of Sources

As we said before, the number of statistics and various types of research is very limited in comparison to cryptocurrency. Actually, the reason for such differences in the amount of available data is simple.

As we know, the cryptocurrency market is open to everyone. Most crypto investors are using this technology as the main way of earning, investing in various Coins and selling them after they grow. In fact, the modern crypto industry has more common with the stock market, rather than various physical currencies.

At the same time, blockchain is software, that has multiple usage purposes and is primarily used by various companies or corporations. Clearly, there is a lot of data and reports about this technology, but mainly it is kept private, according to the privacy rules of these corporations. Yet, even a regular user can find some interesting statistics about this technology on the web. 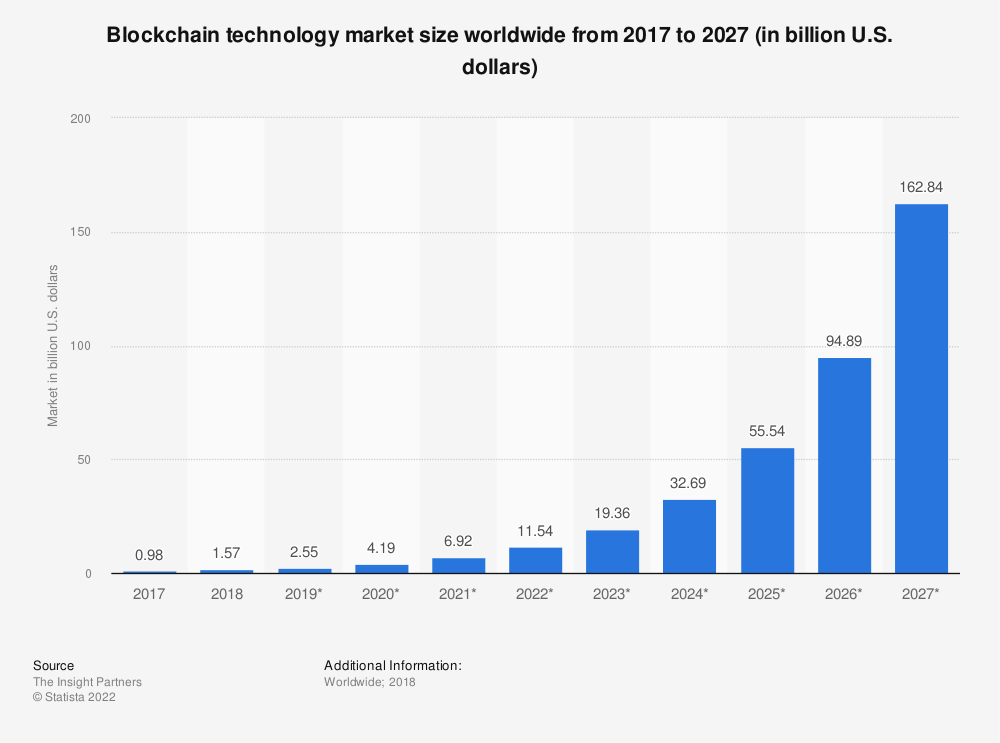 What is wrong with Blockchain?

Clearly, all of the foregoing statistics seem great and promising. But what if we told you, that not everything is as it seems at first glance with these proclamations and research? Before explaining our loud statement, let’s examine some additional stats. 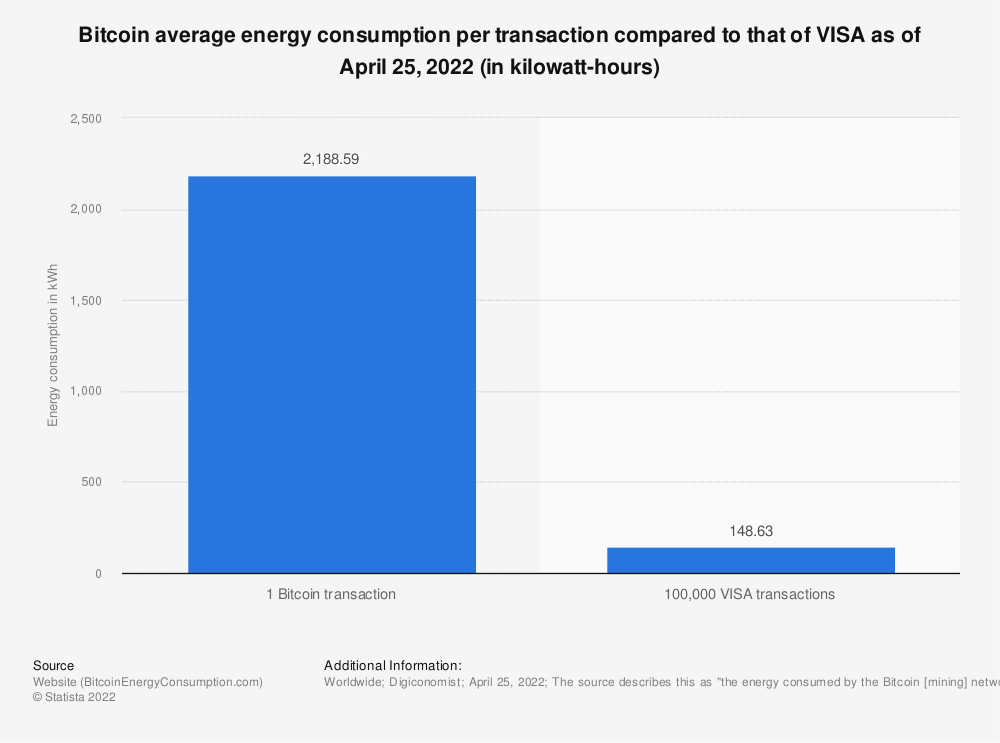 On the one side, these few facts are showing the damage to the ecology, caused by such blockchain technologies. Nonetheless, if you dig deeper and pay attention to the benchmark for comparison, you will see that single blockchain action is compared to 100 000 regular ones. It is a crucial reason for the slow integration rates.

Blockchain is a much more difficult and exacting technology. For instance, in addition to the energy-intensive nature of blockchain technology, it also requires more other resources. Compared with usual bank transactions, blockchain requires more modern equipment, which still doesn’t guarantee that banks will be able to perform all of the transactions at once.

If you take into account that at the moment less than 1% of the population uses blockchain and even if the number of 279 707 transactions per day is true, try to compare them to the same criteria of any bank. Then, try to find overall information: according to The World Bank, more than 3.8 billion people own at least one bank account. Talking about the bank transactions, Cardrates stated that there were 368.92 billion transactions in 2018 or roughly 1.01 billion card actions per day. There are no relevant statistics on this topic for 2022, but it is hard to believe that the numbers are smaller than they were. Most likely, they are eleven bigger.

Obviously, both of these cases are incomparable, and it is impossible to claim that blockchain can replace common payment methods, currency and banking in the nearest future. Most likely, the situation won’t change in 5 years as well. Clearly, it is also impossible to say that it will never happen. Yet, it looks like the blockchain expectations are overrated because there is literally no such software, that is capable to perform about a billion blockchain transactions per day due to their specifics. No need to explain the ecological damage and the amount of energy needed for such a number.

Also, there are some other aspects worth considering. At first glance, the amount of statics on the blockchain is enormous. If you google it, you will find “top 91 facts…”, “74+ reasons why to…”, etc. Regardless, if you explore these articles in more detail, you may find out that some of them are referring to each other. Additionally, the number of independent analytical groups is also limited: most of these statistics are provided by less than 10 companies. Furthermore, some of these stats are very speculative and local, based on surveys of small groups of people.

Indeed, it is hard to assume that 1000 respondents can show you the overall tendency. Nevertheless, it is worth admitting that it is still better than nothing and there are a lot of diverse tools and statistics related to cryptocurrency and blockchain, provided by various marketplaces. So, in case you want to get acquainted with the real situation on the market, you will need to spend days, weeks, or even months researching and comparing these charts and infographics.

To be clear, we are not claiming that blockchain or cryptocurrency as well as the open-source statistics are worthless. Obviously, it would be a lie. Rather, we are trying to explain that not all of the open-source statistics on the topic are correct and it is worth trying and analyzing the facts by yourself. In fact, there is a lot of various research and reports on the topic, but most of them are closed to the public because both technologies are still being developed and their integration process is ongoing, so none of the players is interested in disclosing such information.

Blockchain is a great technology, that can change a lot of various processes and simplify our lives. For instance, apart from the cryptocurrency sphere, blockchain can be used as a security measure, or implemented into bureaucratic procedures like Smart Contracts, Security projects, or Analytics platforms, which are based on Ethereum blockchain. Apparently, it is worth considering and developing this technology but the research stage won’t be an easy one.

8 Main Benefits of Building an MVP