Have you ever heard of blockchain? Do you KNOW what is it, or do you THINK you know it? In fact, there are two very different options. If you hesitate to answer these two questions, then, probably, the first thing that came to your mind after the word “blockchain” is cryptocurrencies. No big deal, actually most common users don’t actually fully understand this phenomenon.

This is why we asked one of our best developers, who have experience in developing such projects, to answer a few questions, that may clarify some aspects of this mysterious technology.

As we learned from our specialists, the cryptocurrency and blockchain networks spheres are relatively new(the first blockchain and cryptocurrency appeared in 2008-2009). Hence, two years seem to be enough term for getting into the industry and having at least a basic understanding of processes.

Probably all people, who are able to use their phones and the internet without third-party help have at least once heard of blockchain platforms and have an abstract view of decentralized network technology, what is it, ad how it works. However, these assumptions need to be more general and still need to be clarified.

Actually, It is simply a method to share data, which can be used in multiple cases. We can name cryptocurrency, NFTs, or Smart contracts among the possible and most obvious use cases. Each of them is data, saved in a virtual paperless format, which allows us to share it with the use of blockchain. 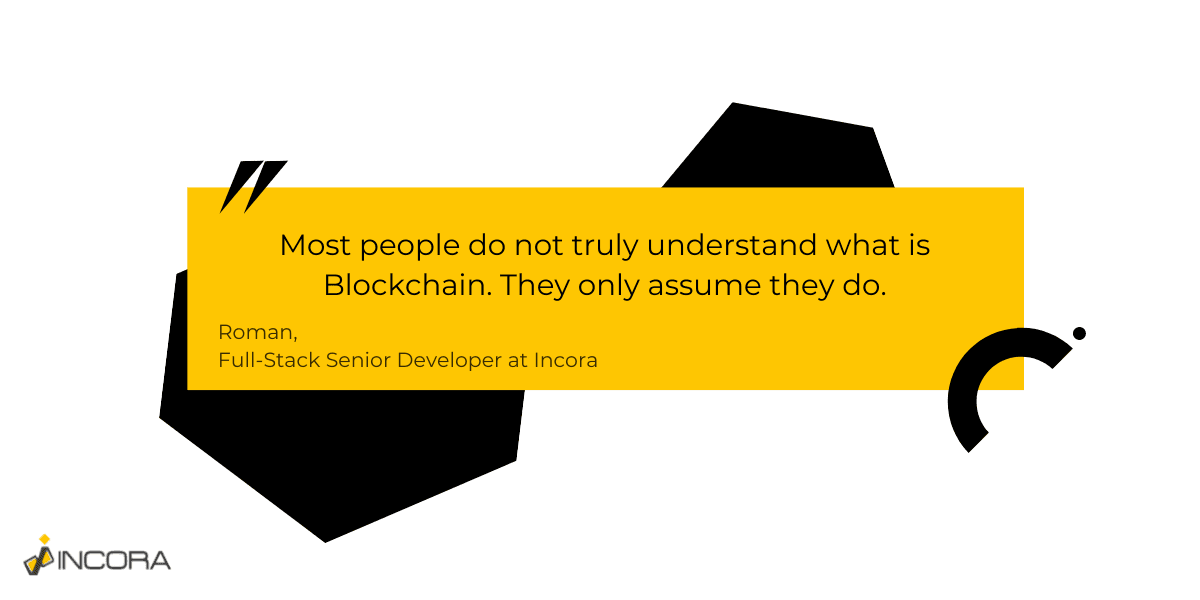 The Technology of the Future or Overrated Solution

Lately, more and more people radicalize in their thoughts about blockchain and blockchain-based technologies. For instance, some of them claim that it is the technology of the future, while others - say that it is just a temporary phenomenon that accidentally becomes too popular and, as a result, overrated.

As a result, even nowadays for many inexperienced people crypto industry is often associated with Bitcoin. So, if you are an investor with spare resources, who suddenly heard of cryptocurrency, most likely, you will invest in Bitcoin. I believe it is a wrong decision because it is less reliable and trustworthy, compared to alternatives. In fact, for now, it is mainly based only on its popularity. For instance, its main competitor, Ethereum, proposes more services like NFTs, or Smart Contracts. As a result, it creates a wide range of usage purposes. This results in a better perspective for ETH, it can grow into a complex system, which can be implemented in numerous other industries. Yet, Ethereum is not the only such solution. Apart from it, I can also name Polkadot or Solana. 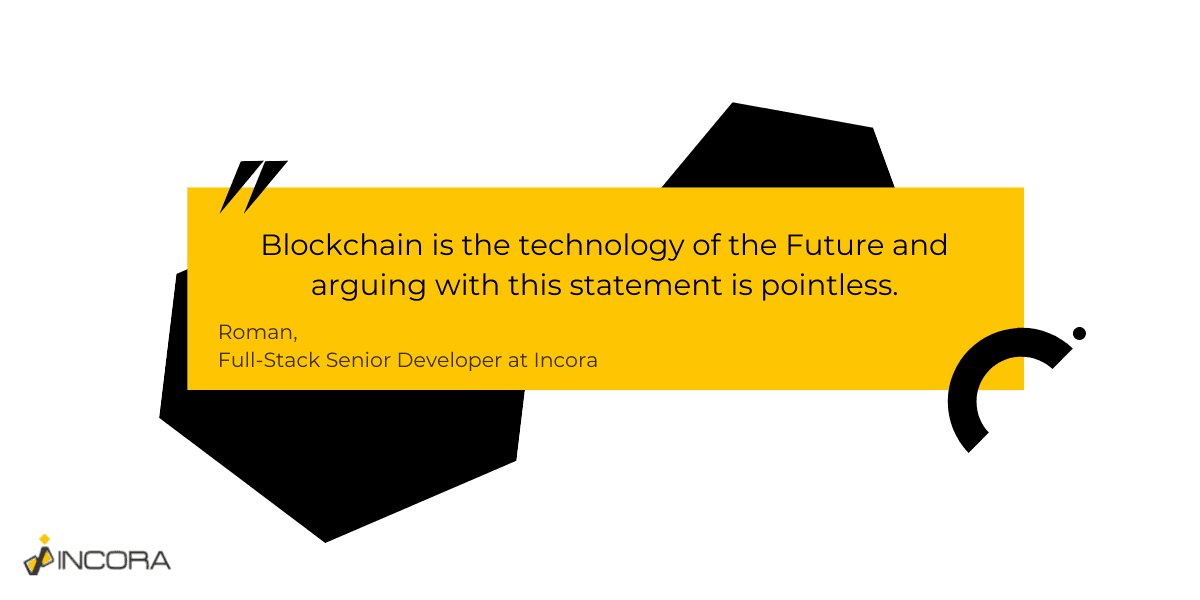 Summing up all the above, people, who consider blockchain only as a cryptocurrency, and thus claim, that it is unpromising technology, are simply wrong. This misjudgment is a spread phenomenon but only for now. Undoubtedly, the cryptocurrency industry played its role in popularizing blockchain applications, yet it is not the only possible use case. Nowadays, there are numerous developing projects, which show the real potential of this tech.

Ok, but we still can see the dependence of these industries on each other. For instance, recently the price of Bitcoin fell from $20,000 to $16,000 per coin, and it is not the first time when the price rapidly changes.

Corporations are not the one, who loses their reputation, but the industry is. Thus, the interest in the technology varies, directly impacting further investments and proposals. Nonetheless, the reputational losses are caused by the wrong understanding of the blockchain concept. When people will understand, that cryptocurrency is not the only use case for blockchain, the correlation will decrease. 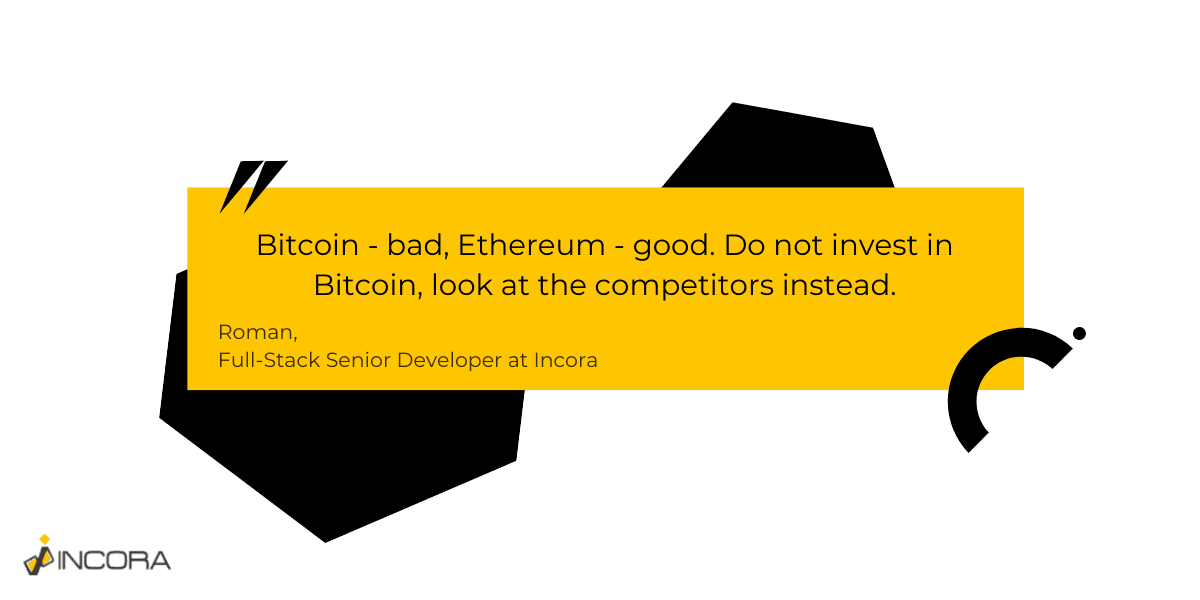 In any case, it is probably impossible to fully get rid of their codependence. Anyway, cryptocurrency is the most well-known and monetized blockchain-related sphere. Each such recession in cryptocurrency will affect the blockchain market as well. However, for now, it can slow down the development of blockchain and investment pace, not fully destroy this market. Even if someday the crypto market will disappear, blockchain will keep existing due to the fact, that there are plenty of other prospective use cases for this tech and business opportunities.

The Secret of Success

Continuing the previous question, it is easy to meet some critical thoughts about blockchain adoption and its evolution. Regularly, some people claim that there are no actual new innovations in the blockchain, except for trying to deal with ecological issues.

Talking about the issues, ecology is the least problem of blockchain. Nobody actually cares about it so much. In fact, there are some more crucial challenges within the industry. For example, one of its features is the inability to make changes and corrections. On the one hand, it makes blockchain-based projects like Polaroid cameras, meaning that there are no possible ways to fake or somehow change the final result (Immutability). It makes this technology highly secure and trustworthy, having almost no possible competitors with such possibilities. 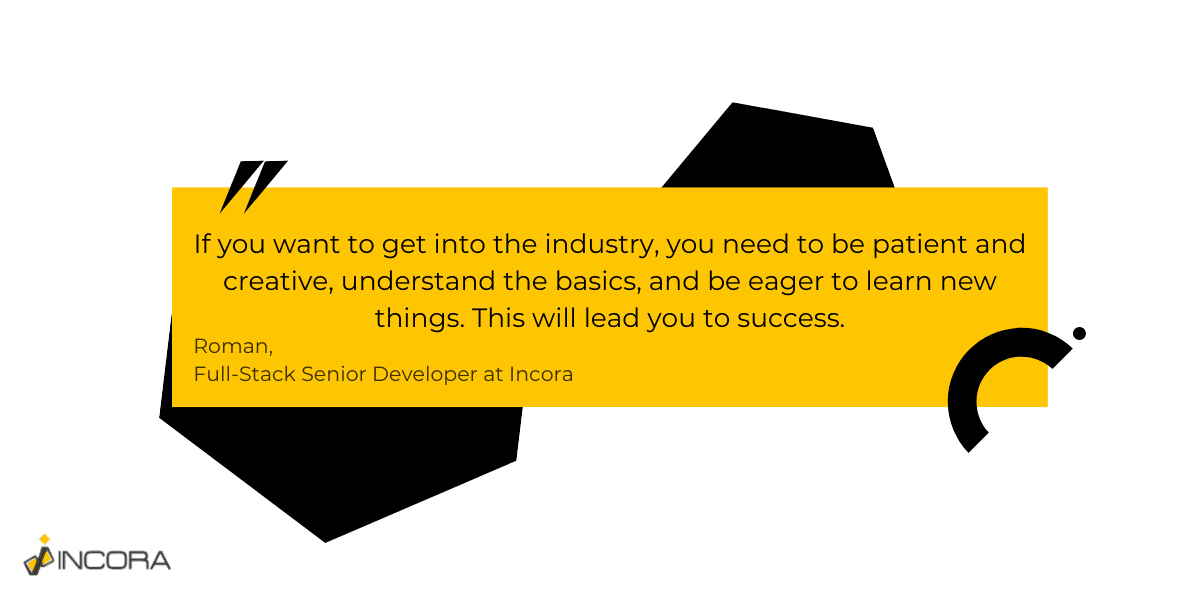 On the flip side, this is also sometimes true for the technical aspects of the work. So, it can be hard to make changes in a developed project. Moreover, the software itself is very complicated and strict. Thus, developing new functionality and features is almost always a very difficult and resource-intensive process. Eventually, it is very hard to find a specialist, who will be competent enough to embody such changes and development. Unfortunately, the technology is relatively new, and the variety of professionals, as well as solutions in this field, is limited at the moment.

So, the blockchain is more than only the cryptocurrency industry. Apart from this field, there are NFTs, Smart Contracts, data transferring, and many other examples. Still, most of them have already become general and common. But there are also impressive or out-of-box cases.

As a matter of fact, VeChain is rather a platform, based on the blockchain and designed specifically for the logistics and delivery industry. It provides both smart contracts, and safe data transactions within the project. As a result, contractors can find all the needed information about the goods. Also, they use some additional software and hardware, connected to the system. Therefore, they can propose more data about the package than traditional CRMs, like storing temperature, etc.

A Piece of Advice

Frankly, Blockchain development is not easy. As a matter of fact, it is partly unique and is not similar to regular IT development processes. Blockchain technologies are based on distinctive principles and the use of specific tech stacks. The overall logic and skills are also different from the ones, that are common to other spheres.

As a matter of fact, even experienced developers, who have a great background in numerous software technologies and know how to work with them, will be ineffective in a blockchain environment, if they don’t know its basics. In fact, this industry is very specific and demanding. Add here also the fact, that it is constantly changing, and you will get a really frustrating result for those, who don’t have any experience in the working specific of blockchain technologies. On the contrary, developers, who know what they are dealing with, are provided with needed software and tools, and are flexible enough, would show great outcomes.

Finally, rapid changes and imperfections make short-term estimation senseless as well. In this case, it is worth planning globally, i.e. setting up the final desired out-turn. Still, reestimation is also a sufficient process worth taking care of. This will help to adjust the possibilities, depending on the changes.

This is why it is always a great idea to study others' development experiences by examining their case studies. This will help you to better understand the possible tech stack and steps to be made.

The Role of Mobile Wallets in eCommerce Growth Strategy

What are the Top Future Frameworks? - We asked a Full-Stack Developer

How to Develop a Non-Custodial Crypto Wallet? [For Storing BTC, ETH and ERC20]